We both wanted to get out of Reykjavik to see a little more of the country, and I was keen to do the famous Golden Circle tour, which takes in a range of sights that all lie within driving distance of the city – but I thought I’d be pushing my luck if I suggested the full-length tour (which lasts for over eight hours), so I booked us onto the shorter version. This goes to all the same places – Þingvellir National Park, the Geysir geothermal area, and the world-famous Gullfoss Waterfall – but you spend less time at each, and (in theory at least) the tour lasts for only six hours.

There are several companies in Iceland which run very similar tours, as well as doing airport transfers, but we went with Reykjavik Excursions and found them very good: the guide was knowledgeable and entertaining, and the driver was excellent. She had to drive through some almost unbelievable weather, as you can see in my first extra, and even navigate around tourists who’d decided to drive themselves, so that they could stop (in the middle of the road) whenever they felt like taking some photos; all of which must be quite wearing, I would think, but she gave no sign of tiredness, and stayed cheerful throughout the day. 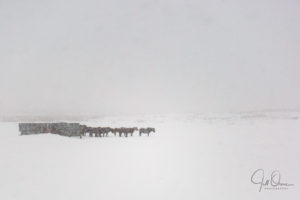 Given the driving snow that seemed to envelop us every time we got onto the coach, we were incredibly lucky with the weather at all of our stops, and especially at Þingvellir National Park, which you can see in the second extra. Here we had the unusual experience of walking down a crevice between the American and Eurasian tectonic plates, which are said to be moving apart at the rate of 2.5cm a year. Þingvellir was the site of the Icelandic Parliament from its establishment in 930AD until 1798, when it moved to Reykjavik, and celebrations to mark events of national importance are still held here. 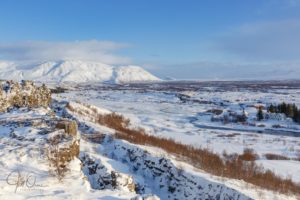 The second stop on the tour was Haukadalur, the geothermal area, where we were able to walk around the various hot springs and pools, and watch the geyser Strokkur erupting (third extra). The Great Geysir lies in the same valley, but is currently inactive and therefore not much visited, and there’s a small geyser here too – not unreasonably called Litli Geysir – which doesn’t erupt, but bubbles away continuously. 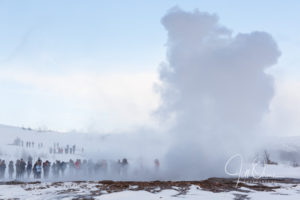 The final stop on our tour was Gulfoss, which is one of the most spectacular sights I’ve ever seen. We arrived at the visitor centre in heavy snow, and I was afraid that we wouldn’t actually see much at all – as we walked down towards the waterfall, the people trudging back up towards us were white with encrusted snow all down one side of their clothing, and none of them looked especially happy – but once again, as we arrived at the river bank the weather began to clear for us. Gulfoss is a multi-stage waterfall: the upper section that you can see here has three “steps”, and then there are two sharp drops, totalling 32 metres, down into a crevice in the rock; a staircase has been built, and in the summer you can walk down to the bottom of the fall, but in the winter the section going down into the crevice is closed for safety reasons, so you can only get down to this level. Having admired the fall from here, R and I then walked up to the top, where I took the fourth extra – the people give quite a nice sense of scale. 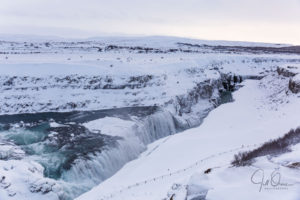 From Gulfoss we headed back to Reykjavik over a high heath – and once again, through driving snow. This slowed the traffic down so much that we arrived back in the city 90 minutes later than planned, but luckily R and I were dropped off on Laugavegur, the main shopping street, which allowed us to fall straight into a restaurant for dinner, before tottering back round the corner to our hotel. I don’t know why sitting in a bus being driven around interesting places should be tiring, but I’m now toadally zorsted.