This morning we visited the National Museum of Iceland, which has an excellent display of artefacts and archaeological finds telling the story of the country’s history, and is also blessed with a nice café and an enticing gift shop. The people here seem to have embraced the art of photography quite early, and the shop sells a range of prints by Icelandic photographers and books on their work, one of which I bought as a souvenir of our trip. The entrance ticket to this museum also gives you entry to the exhibition Points of View at The Culture House, so this afternoon we visited that museum as well. The building itself is quite lovely, and the exhibition is very interesting; it consists of a selection of pieces from Iceland’s three premier museums and galleries, which in many ways are quite disparate, but which together tell the story of Icelandic culture, and the way the people of Iceland see themselves.

We also did a lot of walking, and (of course) quite a lot of snow dodging – though the weather today was a little more settled than at the beginning of the week. We finally made it all the way to the harbour, which is quite picturesque, but I can’t resist featuring this panorama, which I hope gives you some idea of how beautiful Faxa Bay is when the weather is good, and the morning light is catching the snow on Mount Esja.

The birds you can see bobbing around on the water are mainly eider and gulls, though we did spot one red-breasted merganser, and shortly after I took these photos several dozen cormorants flew past to take shelter in the harbour from the next incoming snow shower. One of my few disappointments on this trip was having decided to travel light and not take a long lens with me, because it seemed unlikely that I’d need anything other than a short zoom – which frequently left me hopping around with frustration when I spotted lovely birds around the city. I did manage some quite nice photos of redwings though: Reykjavik is full of them, and whereas in England they’re painfully camera shy, here they mainly sit around in small trees, wittering to each other, and occasionally come down to street level to mug tourists for crumbs. 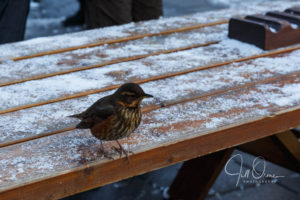 Just for fun I’ve also given you a second, slightly mad panorama around Tjörnin, the currently frozen lake in the middle of the city. Reading from left to right, the main buildings you can see are the Catholic Cathedral (peeping out over the top of some rather lovely houses); the City Hall; the Parliament House; Harpa, the modernist concert hall and conference centre (just to the right of the cranes in the centre of the pano); Fríkirkjan, the Lutheran free church; the National Gallery of Iceland; and finally in the distance at the far right, Hallgrimskirkja. You probably won’t be surprised to hear that it was about to start snowing again when I took these photos.

This evening, for our last dinner in the city, we went back to Old Iceland – just to check if the food was as delicious as we remembered. It was.