By this morning we were well into the swing of things, so as we walked along the bay towards the harbour, while enjoying the sunshine and the sight of Mount Esja emerging photogenically from behind its veil of mist we were also keeping an eye out for incoming weather. I managed to get a couple of shots of the Solar Voyager unenhanced by other humans taking selfies, but, as you can see here, the next band of trouble was already on its way in from the Atlantic. Within a few seconds it was snowing again, and about a minute after that it was virtually dark – so once again we put our heads down, and made for Harpa as fast as we could.

This set the pattern for the day – we did manage to stick to our plan, but were only able to execute it in bursts, between taking shelter in a succession of cafés and public buildings. Luckily Reykjavik is quite a small town, and everything you might reasonably want to visit is highly walkable from everything else – but if you go in the aurora season I recommend decent boots: if instead of aurora you get snow, the hilly streets can be perilous where the snow has compacted down to ice.

Snow has its own charm though, enhancing what would be a very pretty town at any season. My first extra is Landakotskirkja, a huge and imposing church which serves as the Catholic Cathedral for the city – surprisingly, given that Iceland has been firmly Lutheran for many centuries, there’s said to be a growing movement back to the Old Faith. 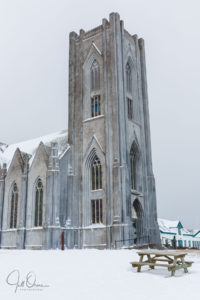 We merely admired Landakotskirkja from the outside, but did spend a while in Hallgrimskirkja, the front of which you can see in my second extra (along with its statue of Leifur Eiríksson, now believed to have been the first European to travel to America). 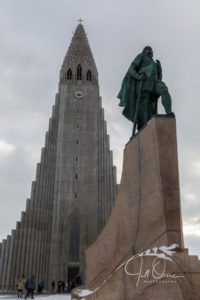 Hallgrimskirkja is an extraordinary building; conceived in 1939 as a tribute to the C17th Lutheran priest and poet Hallgrímur Pétursson, the contract to build it was awarded to a small family company which took over forty years to complete the work, but the structure they finally produced is a landmark that can be seen from almost anywhere in the city – provided, of course, that it’s not snowing. The 360° view from up in the bell tower is fabulous (except when it’s snowing), and the church contains a huge and beautiful organ of 5275 pipes (sadly not being played while we were there).

Other highlights of the day included The Settlement Exhibition, a well-designed presentation of a C10th longhouse which was unearthed on the site (highly satisfying to my inner Viking); the teeming bird life around the frozen city centre lake Tjörnin; and a huge and fascinating relief map of Iceland inside the City Hall. We had dinner this evening at Old Iceland, which I really can’t recommend too highly.