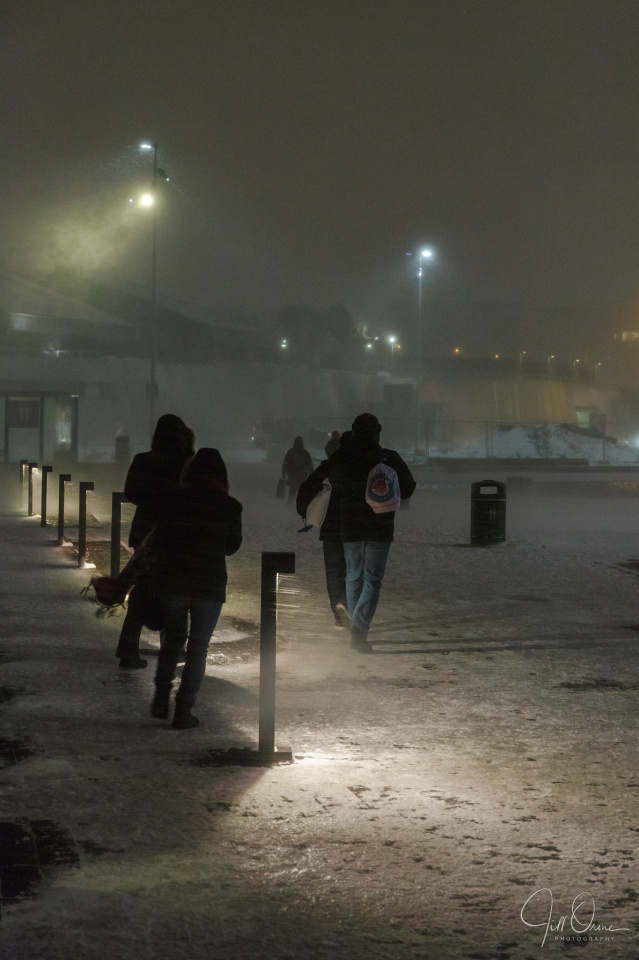 About a year ago now, R asked me where I’d like to go for my Big Birthday – expecting, I think, that I’d say something like, “It’s a while since we were last in Venice….” or “A weekend in Paris would be nice!” When I unhesitatingly said “Iceland,” his response was quite a long way north of enthusiastic – but as he’s said several times since (in a tone I’ve taken to mean “just don’t blame me”), it was my birthday, so it was my choice. Had I asked him round about the point at which I took this photo what he thought of my brilliant idea, I think he’d have had a word or three to say on the subject – but I didn’t get where I am today by leading with my chin.

To be fair, we were expecting snowy weather: the forecast for Iceland for this week had predicted it, and we’d flown in during a minor blizzard, but we hadn’t yet got our heads around the Icelandic saying, If you don’t like the weather right now, just wait half an hour, so having settled into our hotel during a period of meteorological calm, we’d set off towards the Old Harbour this evening in search of something to eat, quite confident that the evening would be cold, but pleasant.

We’re staying in Storm Hotel on Þórunnartún – both names which should probably have warned us, but there you go – and it was therefore only a couple of hundred yards’ walk down to Faxa Bay, and westwards along the snowy front to the famous Sólfarið (Solar Voyager) sculpture I’ve shown in my extra. It was at this point that we were suddenly hit by another snow storm: within seconds we went from admiring Mount Esja, the iconic mountain north of Reykjavik which can be seen across the bay, to being enveloped in driving, swirling, stinging snow, with visibility of only a couple of metres. 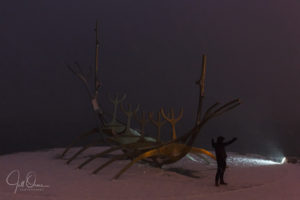 We fought our way along the bay to Harpa, an intriguing building at the eastern end of the harbour which contains a concert hall, conference facilities, shops and restaurants, and which provided instant and very welcome shelter from the storm. I certainly had more fun photographing other people struggling against the icy blast than I’d experienced being out in it myself! Sadly the restaurant and café were both closed for the evening, so as soon as the weather calmed we set off again, driven by what was now fairly ferocious hunger; luckily we were able to get a table at Resto on Rauðarárstígur, and after a nice meal tottered back to the hotel, feeling as though we’d been fairly thoroughly introduced to Icelandic life.