Oh no – silly me! It’s a grey heron, of course. But it does look quite prehistoric, don’t you think?

It was a great morning to be out and about, after yesterday’s miserable, stay-at-home weather. And my theory that birds which had been unwilling or unable to fly in the rain would need to be up and feeding turned out to be a good one: the high Cotswolds were seething with avian life forms. This heron startled me by appearing suddenly out of the rough a couple of hundred metres in front of me, and then proceeded to go up and down and back and forth for several minutes, making a loud complaining noise – so maybe it was more in search of lurve than lunch.

The extra is a heavily cropped photo of a distant great grey shrike – it’s not good, but it does at least demonstrate that occasionally I can be in the right place at the right moment, and nab a bird that people travel long distances to see. Shrikes have fairly unappealing habits – so I’m glad that it was just sitting, surveying its territory, while I was watching it – but I do rather like its stylish mono plumage, and its Lone Ranger mask. 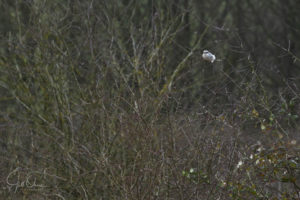 Sadly the bird count for the morning didn’t include any owls (again) – I thought that I’d maybe arrived a little too late, but a regular owl-fancier turned up when I’d been there for about an hour, and told me that this was his second visit of the morning, and they’d been a no-show the first time as well. Perhaps the afternoon crew were luckier, but I had other things to do this afternoon, so I quit at around noon and headed home.

My chosen route down off the Cotswold scarp today was a road known as Conduit Hill, which runs from the A44 down into Chipping Campden. It provides a nice view of the town, with Meon Hill lurking behind it, and I quite often stop and snap the scene if the light is interesting. Today, as you can see, it was really rather dramatic. 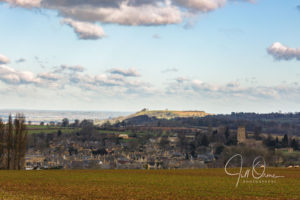