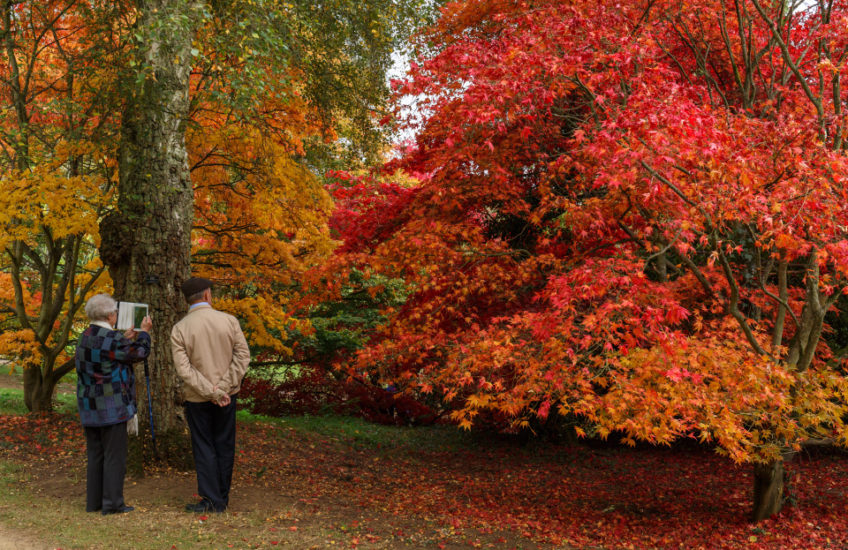 I’ve been wanting to take a trip down to Batsford Arboretum at Moreton-in-Marsh for a couple of weeks now, but not managing to find the time. Today I did have the time, but the light was dismal. I kept an eye on it from my study window for a couple of hours in the hope that it would improve, but it didn’t; but eventually I decided that I might as well go anyway – so off I zoomed.

R and I used to take the Offspring to Batsford quite regularly when they were small and we lived in a house with a tiny walled garden: it was a place where large amounts of energy could be run off without the fear of anything being broken that we would then have to pay for. But other than a single visit to the Archery Centre last year, this is the first time I’ve been there in fifteen years or more, and it seemed a lot smaller than I remembered. It took me a while to realise that this was probably because I wasn’t trying to to do one-to-one marking of a child who was hell-bent on getting lost, drowning, or climbing a tree and falling head-first back out of it.

Today I route-marched round all the walks, and found out a few things that I hadn’t known before: firstly, that the Arboretum belongs to a very large private house (which after looking at the web site I now know to be Batsford Park); secondly that there is a village (also called Batsford), and a church within the Park; and thirdly (from examining the monuments inside the church) that there is a family connection between Batsford and the Mitfords. This last discovery was especially surprising, because it doesn’t seem to be part of the folklore of the area, and it has made me want to read Hons and Rebels again, and to get out Jessica Mitford’s letters to see if Batsford Park is mentioned.

The Arboretum was pretty busy today, despite the murky weather, and there were a number of other Keen Photographers also doing the circuit. At every turn I kept tripping over the same half dozen lurking about in the undergrowth; for a while we just nodded stiffly and eyed up each other’s lenses, but after a while a kind of Blitz spirit took over, and we had little chats about the light, and the (receding) possibility that the cloud cover might lift a bit. It was kind of them to include me in their brotherhood really, because I was the only one not wearing a sleeveless jerkin with dozens of pockets stuffed with filters and other paraphernalia.

As well as the usual Canon/Nikon stuff, there was a wide array of other photographic devices being used throughout the Arboretum, including many phones (and selfie sticks), and a couple of iPads. I’m utterly hopeless at taking photos with my phone, and haven’t even tried doing it with my iPad – and having watched this woman take a few shots I have to say that I’m not going to be attempting it any time soon, because it looks quite tricky. I can see the advantage: once you’ve captured your image it’s there on the tablet, with no uploading or faffery needed; but the physical business of lining up the shot and taking it while holding the tablet straight and still looks like something I wouldn’t much enjoy. The 5DIII may be large and cumbersome, but I won’t be abandoning it for a while yet.

There’s an album here, if you’d like to see more.