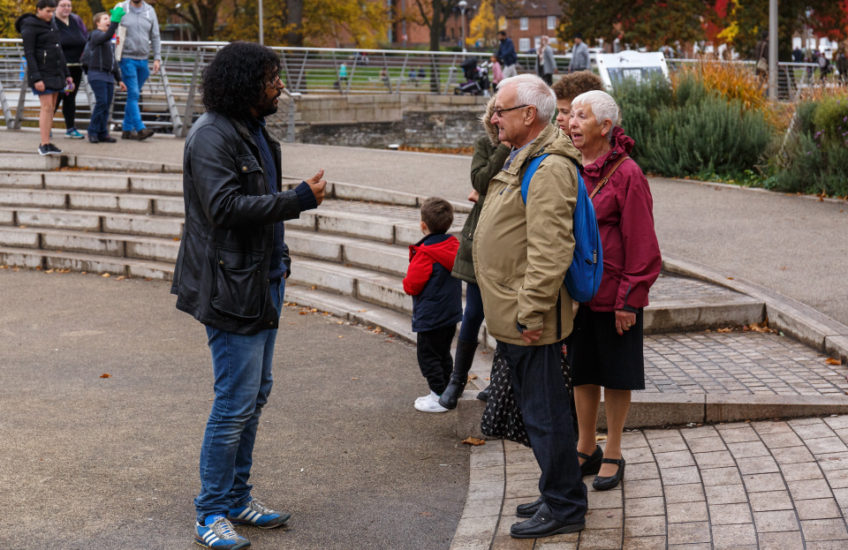 The chap on the left is pretty well-known in Stratford: he’s usually to be found at weekends busking rather good classical guitar at the Warwickshire Firefighters’ Memorial by the river. Today he was taking a break while I was wandering about getting my photos, and chatting with this couple and (I assume) their grandchildren. I don’t know what the conversation was about, but they look to me to be fans of his music – which is nice.

I’d walked across the Bancroft Gardens from Carluccio’s on Waterside, where R and I had lunch today (new menu: disappointing). While we were there my husband proved that he’s still able to surprise me by unexpectedly breaking an ingrained habit of reticence and speaking to the actor David Bradley, who was sitting with a party of people at the next table to ours. R told him how much he had enjoyed the play The Stirrings in Sheffield, which he saw as a boy at the old Sheffield Playhouse, and David Bradley seemed very happy to reminisce about the production, which he said gave him one of his first breaks in the theatre.

I’m delighted to report to you that Mr Bradley is absolutely nothing like Argus Filch, the miserable caretaker in the Harry Potter films – in fact, he couldn’t have been more pleasant. After R had spoken to him a young woman also approached his table and talked to him about some event with which he’d been involved when she was a pupil at one of the local schools, and he was equally charming towards her.

I’ve a feeling that this couple would agree with me that it’s a happy occurrence when someone you admire as a performer turns out to be so likeable in person.