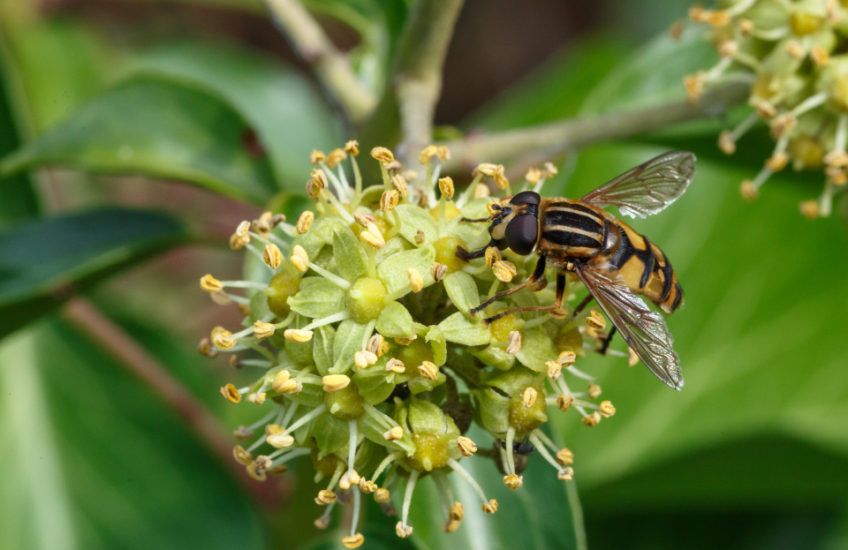 I went for a bit of a potter with the camera this afternoon, and got some quite nice records (despite the fact that someone has flailed a good proportion of the hedgerows in the village in the past few days, and largely destroyed the flowering ivy). There were a few late hoverflies, a pretty Common Carder bee, a very shabby Tachina fera, and one poor, bewildered Andrena cineraria (Ashy Mining Bee), which has emerged out of season and has absolutely no hope of surviving the winter.

I also photographed leaves and sycamore keys, and rather thought I’d be blipping the keys – but in the end I went for this Helophilus pendulus, just because we’re virtually at the end of the bug season for this year. I know I’ve said it before, and I daresay I’ll say it again at some future date (it’s my age – you’ll just have to sigh quietly to yourself and let me get on with my repetitive rambling), but I really do envy that proboscis. Just imagine being able to shoot out a sticky tongue that extends to about the length of your head, every time you pass something appetising:

2. Think how much time you’d save, scoffing en passant, as you went about your everyday business.

I believe that the sticky tongue should be the next stage in human evolution, and I commend the idea to the House.

In other news: the compost heap now has quite a major system of tunnels running through it. I couldn’t find any droppings that might help me to identify the excavator, but given the number of bird feather littering the far garden at the moment, my money is still on foxes.