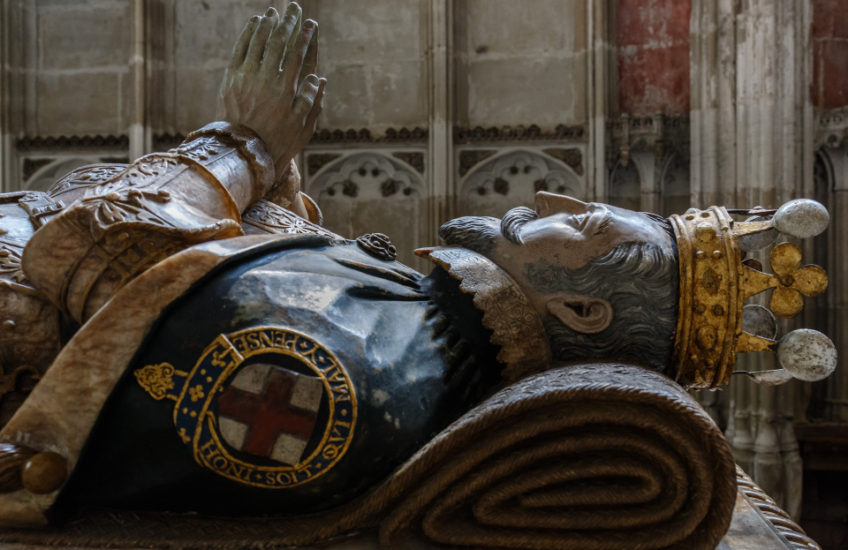 As I had to waste a considerable part of the morning driving over to Warwick Hospital for a rheumatology appointment, I thought that I might as well get something out of the trip by stopping in at the Collegiate Church of St Mary afterwards. I wanted to get a slightly less pinched version of the photo I blipped here, and also to explore some of the other monuments in the extraordinary Beauchamp Chapel.

I spent a fascinating forty minutes going around the chapel, and still don’t feel that I’ve seen everything it has to offer. There was a volunteer guide in attendance who kept popping up next to me and feeding me with interesting pieces of information – many of which I’ve now largely forgotten, because they involved the complex and tangled genealogy of the Beauchamp family, and mediaeval history isn’t as strong a suit of mine as I’d like it to be. She said that she’s usually there on Wednesday mornings, so I will try to time my future visits to coincide with her, so that I can learn some more.

As often happens I’ve struggled to decide which photo to feature – I have at least five favourites from today. When I have a few minutes to spare I’ll put them on my Facebook page, but for today I’ve decided to offer the head end of the tomb I blipped in April, which belongs to Ambrose Dudley, 3rd Earl of Warwick, the brother of Elizabeth I’s favourite Robert Dudley. Ambrose was nicknamed ‘The Good Earl’, for reasons which are now slightly obscure but may possibly be connected with not being suspected of murdering any of his wives, unlike his brother Robert. He died an almost unimaginably hateful death in London on 21st February 1590, a month after having a gangrenous leg amputated, and following his interment in the family chapel this monument was commissioned by his grieving widow Anne Russell.

It’s not known who designed and carved the effigy, but the guide told me that it’s regarded as being a very fine tomb (unlike that of Robert Dudley, a vast edifice in appalling taste, which wound up here after being declined with thanks by Westminster Abbey). She did point out however that there is a mistake in the carving: the motto Honi soit qui mal y pense is running the wrong way around the garter on Ambrose’s sleeve. She also told me that the coronet is a Victorian addition and is, in her opinion, in very poor taste compared with the rest of the tomb.