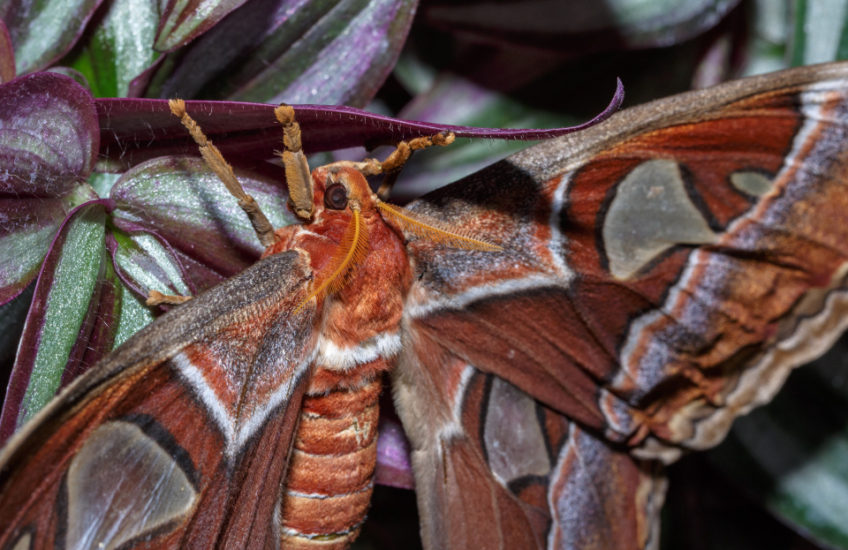 After a leisurely lunch with my friend P, during which we set the world very much to rights, I dropped into Stratford Butterfly Farm in search of a photo. Given that it’s half-term I’d expected it to be hell on a stick, but though it was quite busy there was no more than the normal quotient of small, screaming children, and overall the atmosphere was fairly calm.

The light was poor this afternoon, but happily when I asked a member of staff if I could photograph with flash, they said that it wasn’t a problem as it didn’t apparently disturb the butterflies. I’ve never tried it before, and it took quite a few test shots to get the settings right on my flash unit, but it did make my life easier – I was able to shoot at ISO 800 and f/16, as opposed to ISO 25600 and f/5.6. Despite using a diffuser I wound up with some quite strong highlights and shadows, which I don’t much care for, but I’d say they’re a reasonable price to pay for sharper and less grainy photos.

I’d heard via Facebook that the Farm had recently hatched a number of Giant Atlas moths, so I went seeking and found them in the Discovery Area. Most of them were just hanging, quite still, on a stand of empty chrysalises at about head height, but below them was this plant (which looks rather like a tradescantia) on which some caterpillars were feeding, and as I was leaning over it to get a better angle on one of the hanging adults I suddenly realised that I was about to bump into this chap. He wasn’t feeding – the adults of this species have no mouth parts, and therefore rely completely on the fat reserves they built as caterpillars, and only live for a few days. During that time they are of necessity highly focused on reproduction – though I didn’t see any sign of mothy lurve going on this afternoon.

If you’ve ever seen a Giant Atlas you might well be wondering how I imagine that I can enter this shot for Tiny Tuesday: they’re about the size of a breakfast plate. But I’ve gone for the close-up view here, so I think I can get away with it – I mean, really, just look at its sweet little furry feet, and its gorgeously extravagant antennae! If you’re interested in seeing a wider shot, I’ve put a few here.