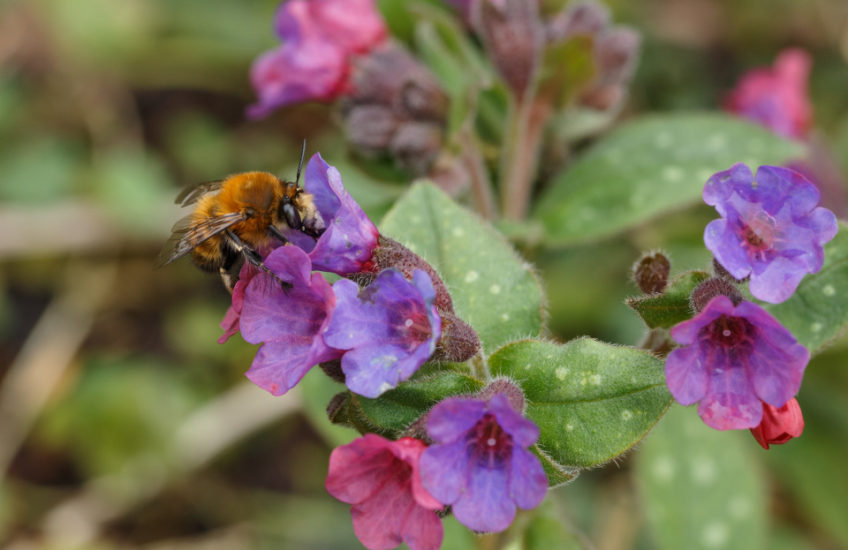 Every day for the past week or so I’ve been checking the flowers that I know are loved by bees and hoverflies, though with only moderate success. Of course, it’s still early March, and whichever bright spark on the Midlands weather forecast this morning scripted the word “mild” has clearly never been to our dark and frigid little valley. I’ll know that spring is properly here when the MX-5 stops pinging a frost warning at me every time I start it.

Anyway, it was cold this morning, and raining; but by lunch time the rain had more or less stopped, so I donned appropriate layers and circuited the garden with the macro lens. I found a few honey bees and quite a lot of tiny moth flies, but nothing else, and I was about to give up for the day – when suddenly I heard hysterical and erratic buzzing, and turned in time to identify a Hairy-footed Flower Bee (Anthophora plumipes) as it flew hell for leather along the border and then disappeared into our neighbour’s garden. After a few minutes it returned, bounced furiously in and out of the pulmonaria, rested on a geum leaf for almost but not quite long enough for me to focus on it, and then pushed off again.

Luckily I know these little bees quite well from stalking them last spring, and I wasn’t surprised by this behaviour. This is a male, whose only purpose in life is to find a female and mate; but the males of this solitary species emerge at least a couple of weeks before the females, and spend this time furiously patrolling their patch to try to make sure that when a female does appear they get to her before any rivals. They fly fast, alternately darting and hovering, until they simply run out of steam and need either to rest (one of the first ones I ever saw was asleep on a hyacinth) or grab a quick bite to eat – and then they’re off again at full speed.

So I went back to the kitchen, made a cup of tea, brought it out to the front garden, and simply waited by this patch of pulmonaria. After a couple more fly-bys I was rewarded by the bee pausing to eat some nectar, which allowed me to take several decent photos of him. One of the others gives a better view of his dramatic and really quite scary mouth parts, but I’m not sure you’re ready for that this early in the season, so I’m posting the one that shows his lovely hairy middle legs. The extra is of him resting (briefly) on an aquilegia leaf. 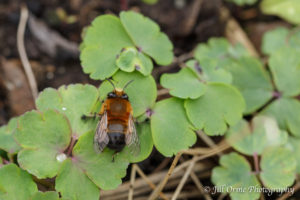 As you can see, he has a superficial similarity to Bombus pascuorum, the Common Carder Bee, but Common Carders, which are social bees, behave quite differently; they’re also a lighter ginger colour, with dark rather than pale faces, and they lack the extravagant leggings. Please do look full-screen, if you have the time.

The soundtrack for today simply has to be this!