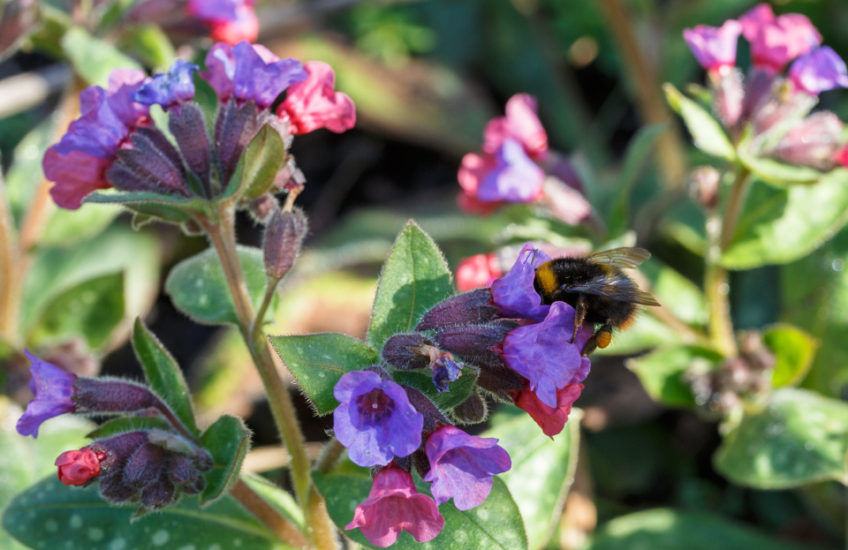 I spent a lot of today working on my photos from the Chipping Campden craftspeople event on Tuesday; I’m almost cross-eyed, but I have now culled around 60% of what I started with, and processed about two thirds of the remainder. With luck and determination I should finish them tomorrow.

However it was a lovely spring day and I didn’t want to waste it (especially as tomorrow is forecast to be showery), so at lunch time I went on a bug hunt. For the record I found:

One Tree Bumblebee queen (Bombus hypnorum), moving too quickly for me to photograph.

One Brimstone butterfly (Gonepteryx rhamni), also on the move and too fast to be snapped.

Two Marmalade Flies (Episyrphus balteatus) – very dark and well marked, like the one I posted a few days ago.

One Gwynne’s Mining-bee (Andrena bicolor) – a tiny solitary bee, this one feeding on celandine.

Several Hairy-footed Flower Bees (Anthophora plumipes), patrolling both the front and back gardens. I was delighted to see so many of them after finding just one yesterday, but the down side of more emerging is that they’re very competitive, and rarely come to rest for more than a couple of seconds. I did manage some photos, but they were very like yesterday’s.

One Early Bumblebee queen (Bombus pratorum), which I’m featuring here. As its name suggests, this smallish bee is one of the earliest bumblebees seen in spring, but it nests and broods so efficiently that there will be two or even three flights each year, so it’s also found well into the autumn. The queen has a black face, a yellow collar and belt, and an orange tail; workers are smaller, and the belt isn’t so well-defined; and males are almost unmissable because their faces are also bright yellow. The BWARS chap who confirmed my identification of this queen pointed out that she’s collecting pollen as well as feeding, which means that she has already selected a nest site; this could be underground in an abandoned mammal nest, in a hole in tree, or even in a disused nesting box.

As you’ve probably realised, the opening of the bug season, after what seems to have been an especially long winter, has really lifted my spirits!