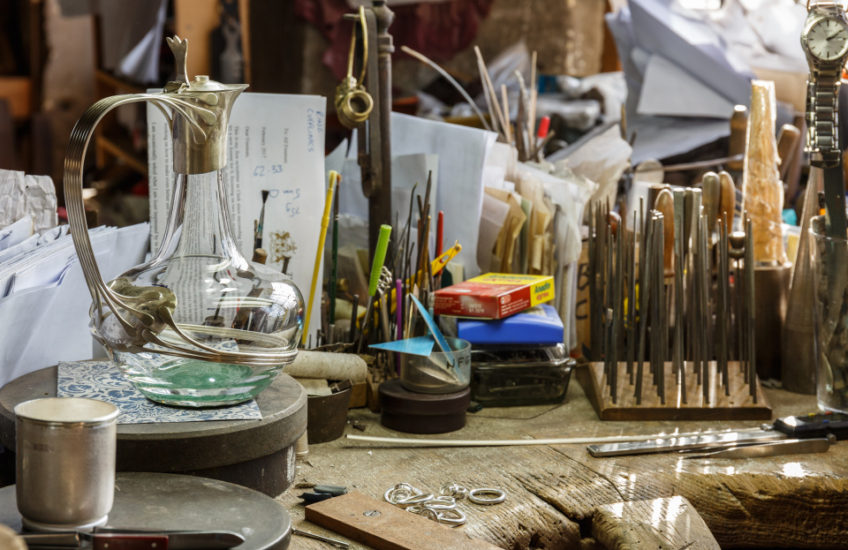 I belong to a photography group called Stratford Clicks, which is largely run on line, but does stage occasional events in the real world. One of the other members, who lives in Chipping Campden, managed to arrange for a few of us to visit and photograph some artisans’ workshops there – and simply by the good luck of happening to see the invitation as soon as it was posted to Facebook, I was able to be one of the group for today’s shoot.

This morning nine of us visited Cherry Press, where the lovely husband and wife team produce wonderfully satisfying bespoke letterpress stationery; and Louise Pocock Millinery, where I was sorely tempted by a gorgeous hat, but managed to resist on the grounds of not actually needing a plum-coloured fedora with a feather. We then enjoyed a delicious (and very reasonable) lunch at Campden Coffee Company, which is on the ground floor of the original Guild of Handicrafts building, before going upstairs to Hart Gold and Silversmiths – where they had forgotten we were coming, but managed to retrieve the situation and accommodate us. While we were in Hart (where two of the current silversmiths are great-grandsons of George Hart, who came to Campden from London in 1902 with C. R. Ashbee) we bumped into the jeweller Caroline Richardson, who kindly invited us into her tiny studio next door to watch her finishing a commission.

I arrived home (shattered) with 604 photos, and although I’ve now culled these by almost half it’s clear that I still have a lot of work to do to process the remainder and decide what to keep. Even working out which shot to blip today has taken me several hours; in the end I’ve gone with this image of one of the work benches in Hart because I adore this decanter (which could be yours for a mere £2,000) – and because it gives you some idea of the extraordinary atmosphere in this workshop, which I suspect may not have been tidied up since around the Second World War. I don’t think they would mind me saying that, by the way – they seem rather proud of their romantic and photogenic clutter.