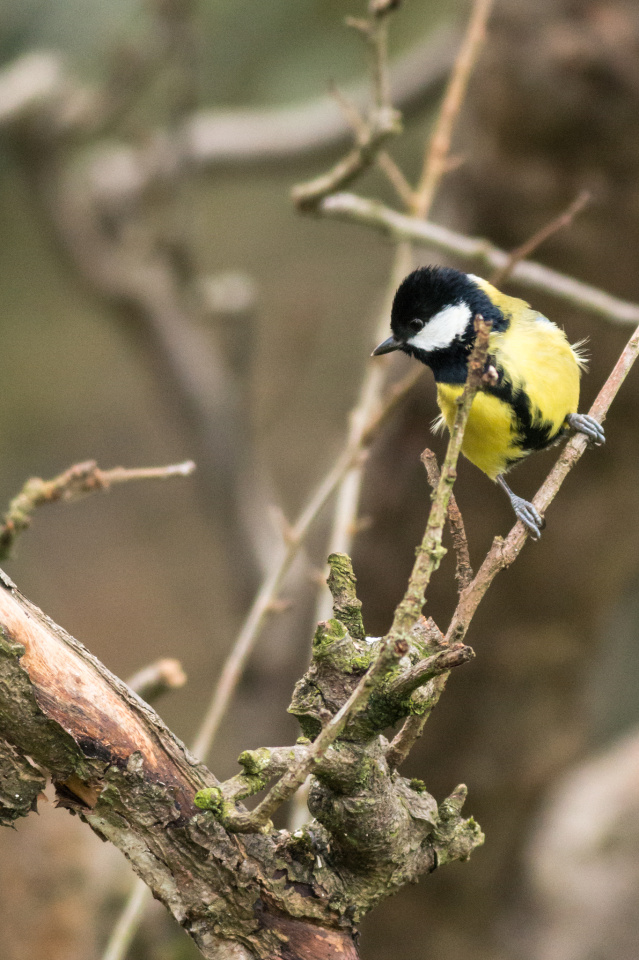 R and I spent some time this morning pruning the apple tree in the near garden, from which I hang some of the bird feeders. it’s quite an old tree, twisted and difficult to prune, for which reason it hasn’t been touched in several years – but it had reached a size at which it was overhanging quite a large area of garden, throwing too much shade onto the borders and making it hard for R to cut the lawn, so we knew that we really had to tackle it.

Working together and using a combination of loppers, saw and chain saw, we made good progress on it – you’d certainly think so if you could see the heap of wood we’ve removed. There’s still some work to do on the higher growth, which we’ll try to tackle this weekend, and sadly we’ve now lost some of the medium-sized branches I’ve been using for the feeders, so we also need to buy some lengths of chain which will allow us to hang them from larger limbs instead.

It’s still windy and cold and a large number of small birds had been flitting about, watching us and trying to grab a little food when they could, so after we’d called it a day and R had gone back to work I found some temporary positions for the feeders and filled them up. Almost before my back was turned they were covered with hungry birds, so I thought it was worth fetching down the 400 and trying for some shots. Of course the garden emptied when I appeared with the camera, but I sat on a patio chair and waited, and pretty soon the blue tits and great tits came back, followed by a coal tit and some finches.

This is quite a young great tit – he doesn’t have the sleek plumage and neat markings of an adult. I especially like his slightly punk hairdo. He’s eyeing the seed feeder – I put out a clean one today and took in the dirty one for washing, so as well as the fact that it’s in a slightly different place it probably looks unfamiliar, and that may be why he was hesitant to use it. The branch at the bottom left of the frame is essentially dead, having been stripped of its bark by squirrels, but it won’t be pruned back on this occasion because it’s a useful hanging branch.