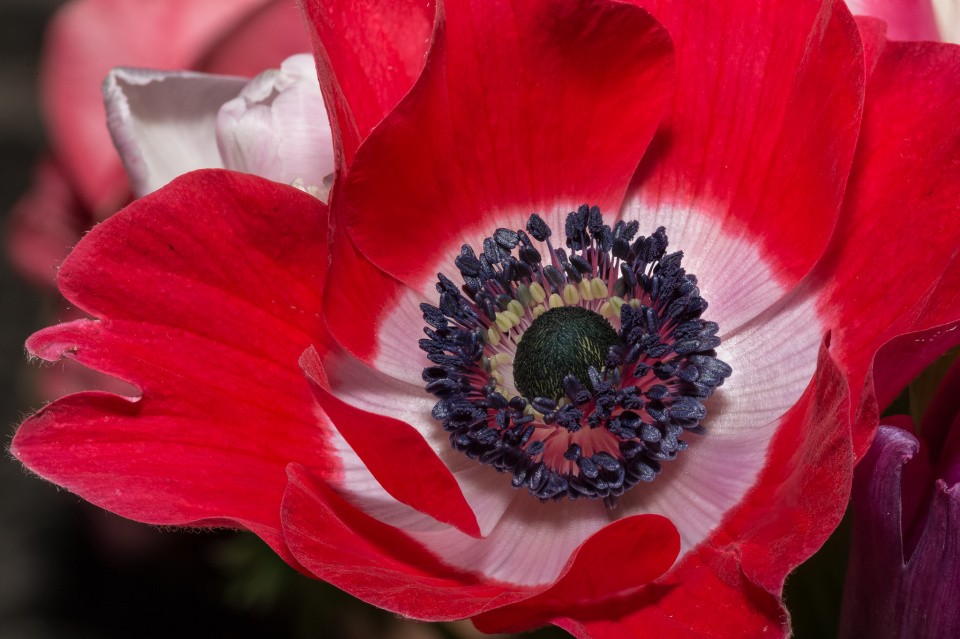 It’s a pity it’s not July, really – this would do very nicely for either Bastille Day or American Independence Day.

I was slightly startled when these anemones opened, to be honest – crimson isn’t really to my taste, and the outsides of the petals had suggested a softer colour – but there you go: crimson they are. And I do love the centres of anemones, and thought that this bloom would be a nice subject for Tiny Tuesday today.

The light being almost Stygian, flash was involved (direct, but with a diffuser). There was also some focus stacking in Photoshop. And finally there was toning down of the colour, if you can believe it. Having edited this shot and a similar one I decided I wasn’t absolutely, perfectly happy with the composition, and went to photograph a different flower which was slightly less open – only to discover that having been left in the chilly conservatory for an hour, all of the blooms had closed up tightly.

I had a bit of an issue with my tripod when I was setting up this shoot: it has a ball head, which has always supported the 70D perfectly well, but if the 5D has a heavy lens on it (and in this case a flash unit), the head won’t hold firm when angled downwards. It’s been a bit of an issue for a while, but seems to be getting worse – today I had set it up so that the lens was only just below horizontal, and when I took my hand off the trigger grip it (and my heart) suddenly plummeted to the vertical. I did a quick mental calculation of the value of the body and lens together, said a bit of a prayer, and when I took the camera off the tripod and tested it everything was still working. But I didn’t dare try the same thing again, so I wound up using R’s tripod, which is quite flimsy and has a quick-release plate that I don’t much trust either. Even though there were no more incidents it was all very stressful!

The annoying thing is that in January Manfrotto were running a promotion on some of their tripods, including carbon-fibre ones, whereby they supplied you with a £100 head free of charge with proof of purchase: I thought long and hard about taking up this offer, but finally decided that this wasn’t a good time to upgrade a tripod which I use maybe once a week. So now, two days after the end of the promotion, I have bruised ankles from kicking myself.

The purpose of telling you all of that is not simply the fun of complaining, but to ask if anyone reading this has experience of using a gimbal tripod head. They’re available separately, so I could theoretically (screw thread size permitting) simply swap out the unreliable ball head for a gimbal which claims to hold up to 8kg – but I’ve never used one, and although I know that they’re recommended by Serious Photographers I’d like to be confident that they’re the kind of thing a Flippant Photographer such as myself would enjoy owning. If you can advise me, do please be in touch.