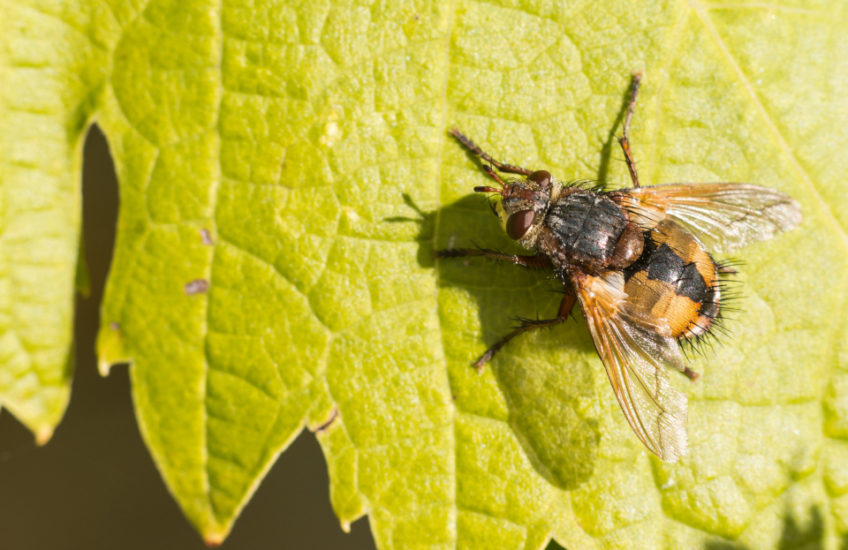 Which sounds like an exotic alcoholic drink, but is actually the name of this very ugly fly.

It wasn’t good bug weather today – it was cloudy and dark for the most part, and the wind that’s currently coming our way from eastern Europe was bitter. So I decided to put my plan to go to a nature reserve on hold and stay at home: it was just as horrid out in the garden, but at least I was never more than 100m away from a fresh cup of tea.

I spent a while standing by our large viburnum, which has come into flower even though the leaves haven’t yet dropped, and the scent of which is almost overpowering; surely, I thought, if there’s anything about, it will be attracted to this. But I think it must be one of those meals that smells better than it tastes – a Small Tortoiseshell sampled it (though too far away for me to photograph) but then left, and a couple of hovers zoomed in and just as quickly out again.

Eventually I found a couple of Twin Spot Centurions down in the wild garden – both female, and rather elegant, I think. No-one seems to know very much about them; the larvae grow in manure and such, but what, if anything, the adults do other than breed seems to be a mystery – they mostly appear to stand around on leaves like this, looking enigmatic.

Then, back at the viburnum I found an Eristalis tenax hoverfly, sitting on a leaf having a wash.  They’re about the size of a honey bee, and make a very similar noise, so it’s easy to confuse them with a bee – but I blipped one a couple of weeks ago so I recognised it straight away. It wasn’t very well-positioned, but I took a few shots before it flew away.

And that seemed to be it, apart from the usual range of flies – but my growing interest in insects and spiders doesn’t yet extend to flies. Or so I thought…. but then I spotted this monster on a vine leaf, and was simultaneously repulsed and fascinated. I’ve got a nerve submitting it for Tiny Tuesday really, because it was huge – maybe 12mm long – so I’ll have to hope Jen is feeling generous. Apparently they’re quite common, but I’ve never seen one before – and from R’s reaction to the photos, neither has he. The adult flies feed on nectar, but the larvae are parasitic, especially on the caterpillars of some moths. I like moths, so Tachina fera goes down as a Bad Thing in my book – but even if I’d known about its nasty habits when I was taking the photo, I doubt I’d have been able to kill it. Partly because killing anything really isn’t my bag, and partly because it was too scary – and when I startled it, too quick.

As we’re in “Eeeeuurgh” territory, I can’t resist giving you as an extra something which is fonder of flies than I am. My Photo Scout called to me that if I was quick I might get some shots of a garden spider wrapping up a fly in the web outside his study window – but by the time I got there the wrapping had happened, and the spider was hauling its catch away to its nest, while simultaneously appearing to be breaking and reconstructing the web. Fascinating – and it looks to me as though lunch was a flesh fly, so I’m not wasting any sympathy on it. 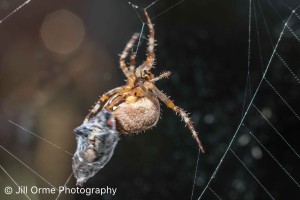