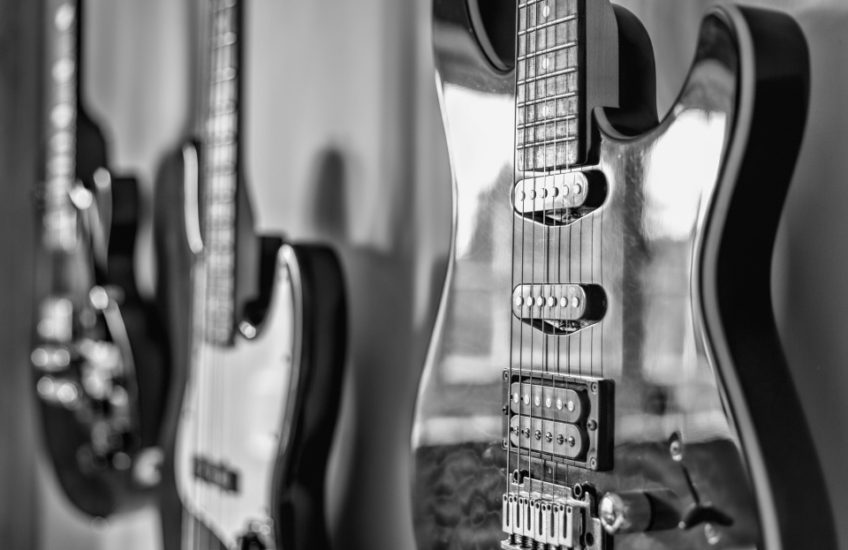 Husband and Son have both been rock musicians in their time. R was in a semi-pro band for a while after university – they were very good, and might have Made It but for the fact that they were producing well-crafted melodic stuff at a time when the zeitgeist was moving punkwards. He has continued to play and sing through the years, but these days his main love is writing and/or arranging solo acoustic guitar pieces.

Both the Offspring have musical talent, but Child Two started learning the guitar at seven or eight, and just kind of could – it was almost as though he was born to do it. He formed a rock band with three friends when they were at High School, and they became pretty well-known around our little pond. In fact there are still a few of their songs on my iPod, and I confess that if this comes up when I’m driving, I do notch the volume up to 11. He then went on to take a conservatoire degree in jazz, and now divides his time between playing jazz guitar in various bands and running his personal singer-songwriter project, People Poems.

So I live in a house of guitars. They hang on walls, sit around on stands waiting to be tripped over, and the cased ones fill cupboards and lurk under beds. There are also amplifiers of course, and speakers, and pedals, and many, many bags of assorted leads. And a drum kit. The accordions (one per Child) have both left home now, I think, though I wouldn’t swear to that.

I wouldn’t want you to think I’m complaining here – none of this is in any way a problem to me. Rather the opposite, if anything.

Me: “I’m thinking of buying a second camera body.”
R (from somewhere in the middle of his guitar collection): “That sounds like a perfectly reasonable idea.”

Me: “I think I might get an iMac – I have a notion that it would run my editing software better than W7 does.”
R (thinking of his recording software, which was also written for Mac, and more than happy to use me as a crash test dummy): “Good plan – go for it.”

So when Nickimags888 set Rock as the topic for today’s Mono Monday challenge, I just had to decide whether to photograph one of Child One’s fossils and minerals, which she sweetly loaned me a while back, or part of the National Guitar Collection. And because the fossils and minerals speak more of wet days and Tiny Tuesdays, I went for the guitars. These three live on the wall of what we still call H’s room, even though Child Two only drops in for brief visits these days. When I explained to R that I’d shot them this way because the nearest one is the prettiest, he made a noise like a whale spouting – apparently the Gibson at the far end and the Fender bass in the middle are much better instruments.

That’s what you get for allowing a photographer to go making creative decisions in among your guitars.