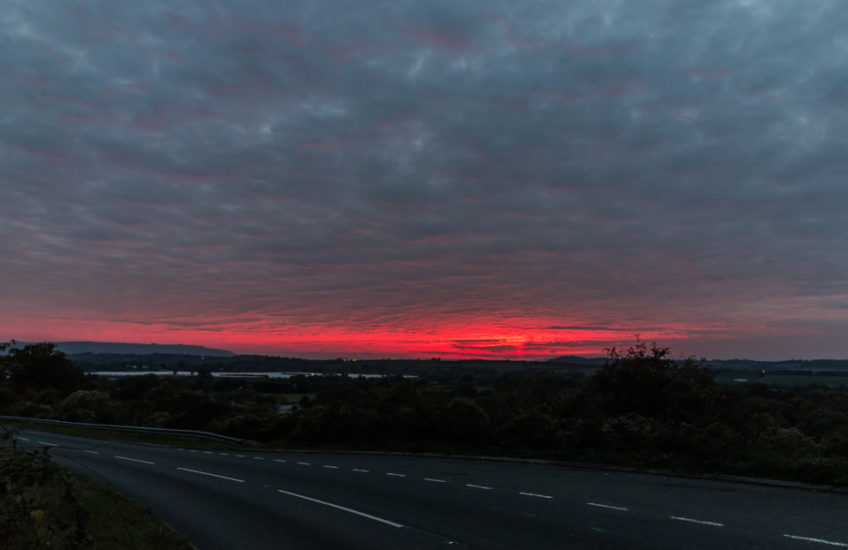 I don’t know what the people of the Vale have been up to, to deserve this – but I bet they’re sorry now. Somewhere out there in Middle Earth, two little Hobbits are bravely struggling towards Mount Doom, carrying a ring that must be destroyed….

When R came home from the evening dog walk and told me that there was a wonderful sunset sky, I grabbed the camera and ran – only to get stuck in the most extraordinary logjam of cars, all trying to get in and out of the village at the same time. By the time I got up to Offenham Bank and pulled into a side turning, the vivid pink and blue quilting that had covered most of the western sky when I set off had already faded. I ran across the road, skidded to a halt, took this shot, and then ran up Windmill Hill to the nature reserve. There was maybe half a minute between this photo and the next one I took, and the sky in that was about half as good as this, so I didn’t hang about very long. I arrived home a few minutes later, still slightly out of breath, and ranting about People Who Don’t Understand the Concept of Right of Way.

I’ve been seeing photos of this evening’s sunset all over Facebook for the last few hours, so it’s likely that you’ve already seen much better ones than this – but that’s just the way it goes sometimes. And at least I got some exercise!

I’d like to say a huge “thank you” for all the lovely comments, stars and hearts I received from you charming people for my 500th blip yesterday – they were all most sincerely appreciated.