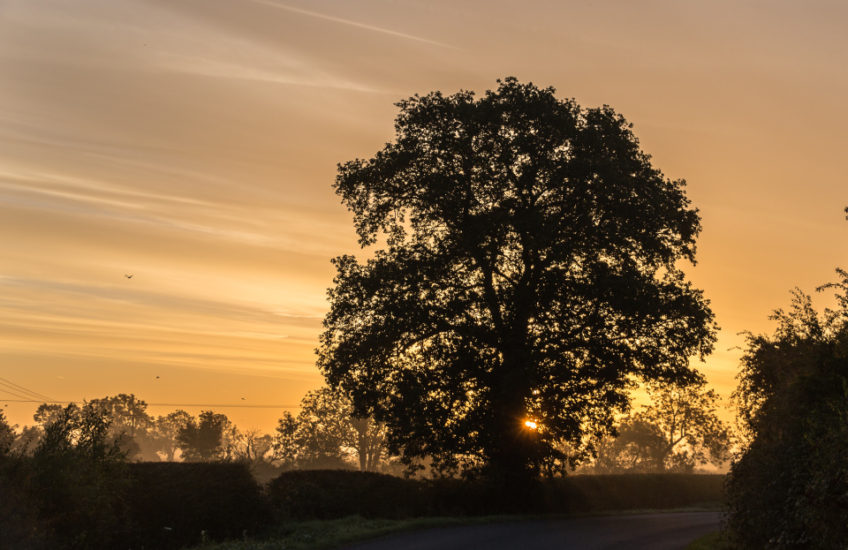 I’ve been meaning to do a dawn shot for the past few days, but not quite managing to get myself out of the house on time – and I almost didn’t this morning either. I woke up shortly after 7am and saw that the light was good, but knowing that sunrise was at around 7.20 I thought I’d probably missed my chance. Just in case, I threw on clothes and ran to the car, and managed to get to the nearest good vantage point by 7.17 – that shot is the first extra. 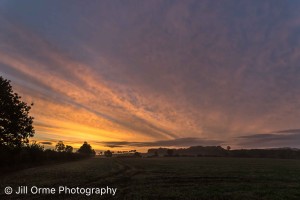 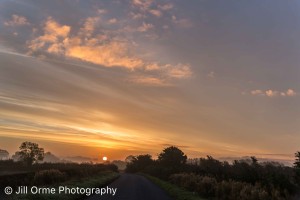 The second extra was taken between Pebworth and Long Marston;  I came round the corner onto this stretch of road just as the sun broke the horizon, so I stopped, got out of the car and watched through the mist till it was fully up. The hill you can see to the right of the horizon is Meon, and I decided to head there next, so I skirted Long Marston and turned down towards the Quintons, crossing the old, defunct Broadway to Stratford-upon-Avon railway line. As I drove down this road I was keeping one eye out to the left, because there’s a buzzard which regularly perches on the telephone wires that cross the field and I’m dying to get a photo of it – it’s a very odd sight. The buzzard wasn’t there, but then I came around a bend and in front of me was this oak tree, silhouetted against the misty gold of the rising sun. Luckily the road was clear, so I was able to stop and take this photo, which is R’s favourite of this morning’s set, and therefore gets to be the featured shot.

I was back in the house by 8am, so I confidently expected to be posting by lunch time – but Life and Lightroom had other plans. In between multiple crashes and restarts of my editing suite, I spent a while holding a ladder and passing implements to R while he cleaned the big sash windows at the front of the house for me, and I also had to spend some time bathing Roley’s face with saline to make him more comfortable – his fur was very sticky with discharge from the abscess, which was clearly irritating him. It has now stopped draining, which on balance might be a bad thing because the swelling is worse than it was yesterday: he looks as though someone has punched him hard just below his right eye. The antibiotic shot he was given yesterday is now being topped up with oral antibiotics, but I’m not confident that we won’t have to go back to the vet before our scheduled visit on Tuesday.

The most dramatic interruption to my editing came at about 2pm, when there was a loud bang as a bird flew into the glass of my study window. That’ll teach us to wash it – yesterday it was so dirty it probably looked like a solid wall. Anyway, R (whose study is below mine) saw the bird drop from the sky and land in a heap on the edge of the front lawn. He went and checked it, and reported back that it was breathing but not moving. He kept an eye on it for a while, but the situation didn’t change, so then the question of whether it should be “put out of its suffering” had to be discussed. At this stage I also went to take a look at it – it was a small greenish bird, with a black head and white markings under its eyes, which neither of us could immediately identify, and it was breathing quite fast through an open beak, but making no effort to get away from us.

Just in case it was still merely shocked and winded, I went and found a small cardboard box and put some straw in it, along with a jar lid filled with water, and R carefully picked up the bird in his handkerchief (at which point it did put up some resistance), and put it on the straw. We then put the box under cover in the porch, on top of the bin of bird seed, in the hope that it would escape the attention of next door’s cats. When we went out at 3pm it was more alert and clearly watching us, but still not moving.

All the time we were out in Stratford we kept returning to the question of what to do about the bird – which by now R had discovered was a blackcap. In the end we decided that if it was still there and still alive when we got home I would call the Vale Wildlife Hospital and ask if I could take it down to them. We got back at about 5pm and I went straight to the porch, to find the blackcap sitting in the water I’d provided, staring at me.

Me (conversationally): “Why are you sitting in that water, you silly sausage?!”
Blackcap: “WAAAAH!!! A PREDATOR!!!!”

It scuffled across the top of the straw, took off, and flew straight into one of the glass panes of the front door.

It dropped slightly, lifted again, turned and flew across the garden into the flowering current bush, from where it could clearly be heard complaining. So, with a bit of luck, and if it can find somewhere a bit warmer and safer to spend the night, we think it might just be OK. We’re pretty chuffed, and very glad that we decided to give it a chance and not euthanise it.

But I won’t tell you what R said when he came into my study and saw one of its feathers stuck to the window he cleaned just this morning….!