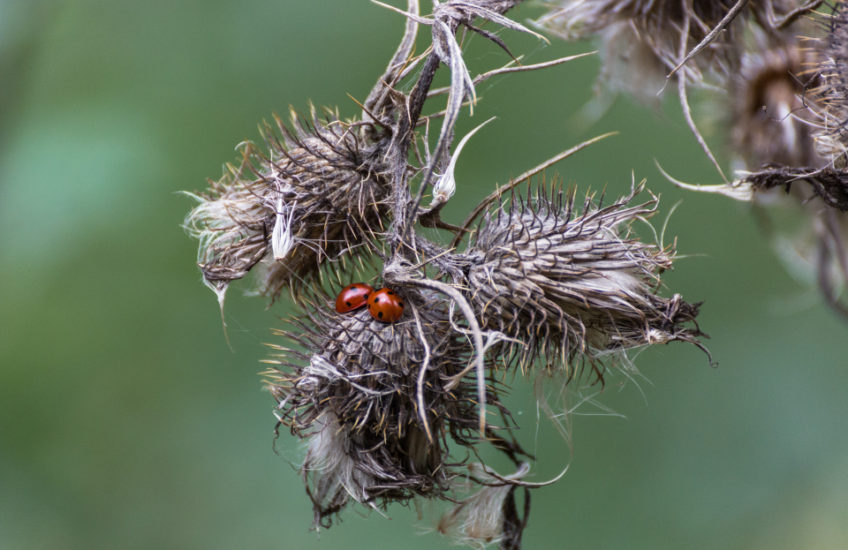 I walked around Oversley Wood again today, and there had been a noticeable change since my last visit a couple of weeks ago. Then the area was teeming with bees, butterflies and dragonflies, but today there were hardly any insects around, even when the sun was out. I did manage to photograph a Southern Hawker, hunting around the edge of the Conservation Pond, but the best that can be said for the photo is that if I showed it to someone they would be able to recognise it as a dragonfly. Probably. Provided they already knew what a dragonfly looked like.

While I was standing at the pond a flock of long-tailed tits came down into a blackthorn bush near me, and sat there bickering for a while before flying away again. I was charmed by them – they always look so sweet, despite the fact that they’re so argumentative – and happy because the autofocus of the 5D managed to pick one out through the intervening shrubbery.

But this is my favourite shot of the day, because it’s so autumnal. You’d think it would be highly uncomfortable, wouldn’t you – sleeping on a thistle bract? But they seemed perfectly relaxed, insofar as one can judge these things – I suppose that’s the advantage of wearing your skeleton on the outside.

Good grief – is that the time? I’m late, as per – it’s time to go and practice some Mozart with Campden Festival Chorus. I’ll catch you good people later.