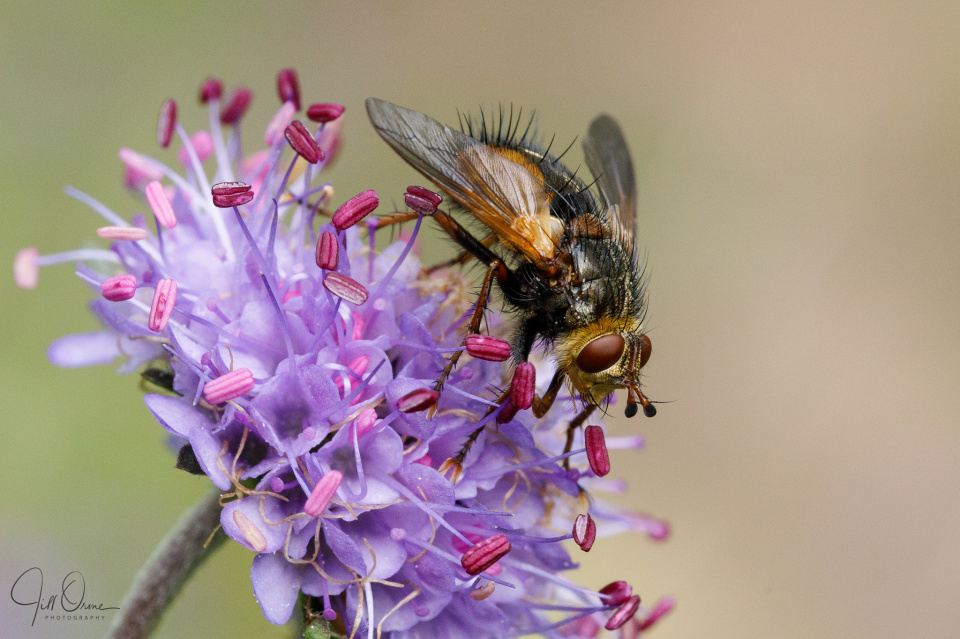 I’m finally getting on top of Baby B’s cold now, and after an undisturbed night’s sleep with no hideous coughing fits, I woke up this morning early(ish) and raring to go. So I got up and went, over to Trench Wood.

The devil’s-bit scabious is now in flower in the open meadow area and all along the rides, and it was literally covered in bees, flies, and hoverflies – though surprisingly, not with butterflies, of which there were very few about this morning. During a three-hour walk I took over 400 photos, and having processed them all this evening I’m still trying to cull them down to a reasonable number of keepers, but as soon as I saw this one on a big screen I knew that – even though I have portraits of much prettier subjects – it was likely to be my photo of the day.

Tachina fera is a large tachinid fly that can turn up almost anywhere, from forest clearings, to moorland, to gardens. It’s over a centimetre long, with a wingspan of around twice its length. It produces two generations per year, the spring brood being on the wing from April to June, and the summer brood from July to October. Adults feed on pollen from a variety of flowers, but as with most tachinids, the larvae are parasitoids of the larvae of a range of other insects – in the case of Tachina fera, mainly the caterpillars of a number of species of moths. As some of these moths, such as Black Arches, are regarded as pests in commercial woodland settings, Tachina fera tends to be viewed as a beneficial insect The female doesn’t lay her eggs directly on or into host caterpillars, but deposits them on the leaves of a larval foodplant, where they hatch and then seek out their hosts, one Tachina fera larva entering each caterpillar and feeding on it until it dies, at which point the larva pupates.