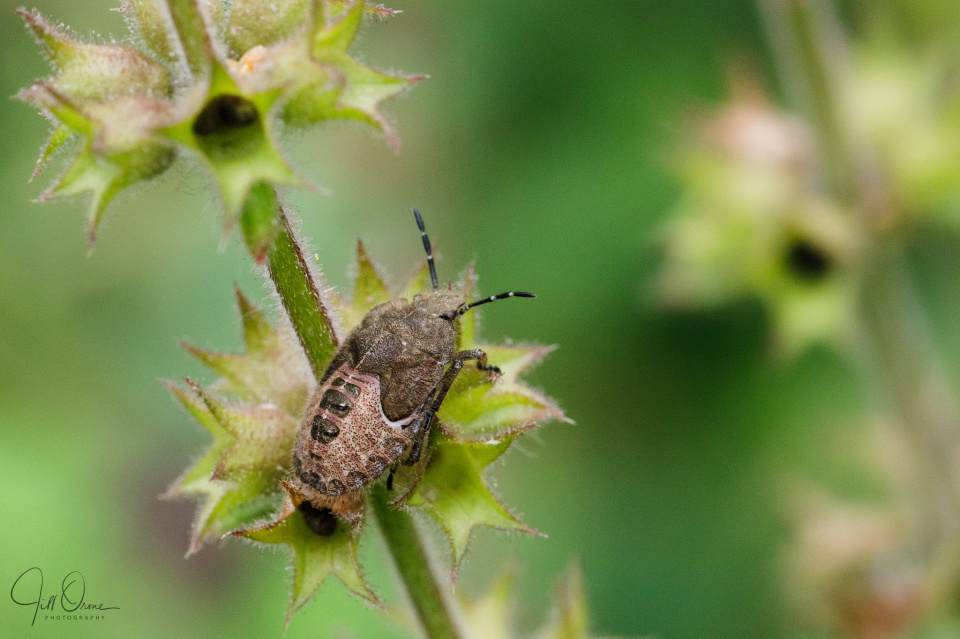 This is the cuckoo in my shieldbug nursery – an analogy that promptly falls to the ground, I confess, because although it’s not yet fully grown it’s entirely independent. But anyway. I still have several dozen Woundwort Shieldbugs on the hedge woundwort, all now either adults or final instar nymphs, plus this one interloper, which sticks out like a hairy, pink and brown thumb.

The only adult Hairy Shieldbug I’ve noticed in the garden recently was this one, which I photographed on toadflax, just a few inches from this spot, on 1st August. If anyone knows how to sex a shieldbug, do please let me know; I can’t, so I have no idea if that one was male or female, but there had clearly been a female laying eggs in the locality, because I spotted this single nymph on the hedge woundwort on 15th August. It had already achieved one of the mid instar stages, so must (I think) have been laid several weeks earlier; ten days on it has reached the final instar stage, and looks to be ready to moult into its adult form. Once it has undergone its final moult it will feed up until the weather turns cold, and will then hibernate, either tucked into the remaining leaves on one of its food plants, or in leaf litter on the ground. During the winter it will become a fairly uniform brown (presumably for camouflage), but it will colour up again in spring when it emerges and starts to look for a mate.

Fun fact: this insect used to be called the Sloe Bug (and still is, by me, on occasion), but although the adults are said to love a range of berries there’s no evidence of them having a preference for sloes, which is why it’s now commonly called the Hairy Shieldbug. Which is, let’s be honest, a perfectly reasonable name.