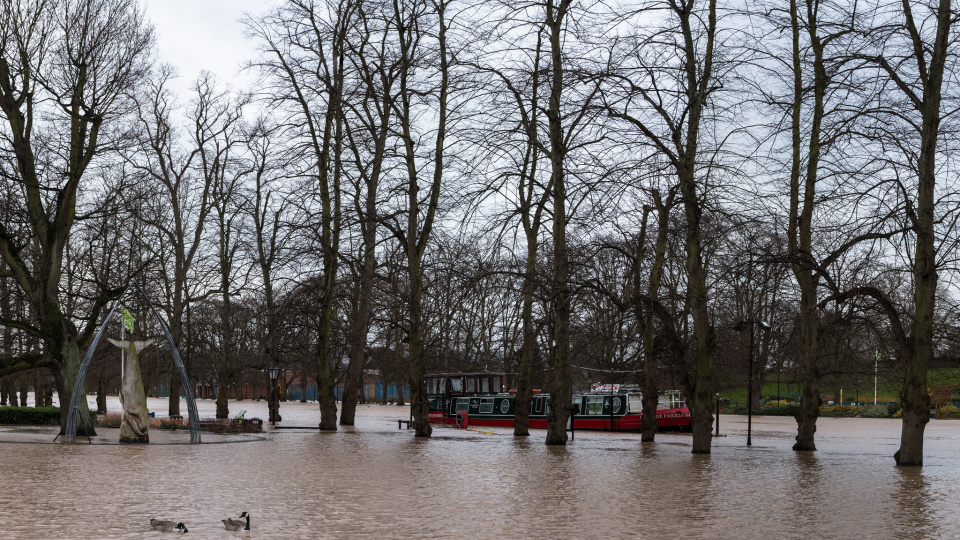 Every now and then the River Avon decides that it likes the Vale of Evesham so much that it’s going to spread out and relax there for a while, and this was one of those days. This is part of a small park called the Workman Gardens; the Spirit of Freedom is moored against what is normally the river bank, and the double line of trees marks what should be the riverside path. I told the story of the Evesham whale (which looks rather more at home today than it usually does) in a blip about a year ago.

I’ve put another handful of shots on Flickr, starting here. If I’d used one of the ones with the blue building in it I could have tagged it for this week’s Derelict Sunday because it’s the Park View Hotel, but it was behind me when I took this.

It was bitterly cold in the gardens, so I didn’t hang around after taking my photos. I had a quick coffee and then set off towards home, stopping in the lay-by on Offenham Bank so I could walk up Windmill Hill to take a panorama across the Vale. I expected the steep path up to the nature reserve to be treacherous, but it wasn’t too bad once I’d got past the first section, which though quite flat was incredibly slippery – I slid from one side of it to the other and only just managed not to fall.

Up on the top of the hill the footing was fine, but the furious gale blowing from the south made it hard to balance – I had to increase my shutter speed because I simply couldn’t stand still. Again it was horribly cold, so as soon as I had some shots I cautiously made my way back down to the road. As I approached the place where I’d slipped on the way up I stopped and looked for the best way through to firm ground, selected a line that didn’t look too bad, placed one foot on it, and as I lifted the other found myself flying sideways.

As my base and my apex exchanged their normal positions in the scheme of things, the only printable thought going through my head was “CAMERA!!”, and somehow when I came to rest I had the camera held up in the air. Luckily mud makes for a reasonably soft landing (although I fear that I may currently be sitting on a lens cap-shaped bruise), and an initial inventory suggested that the only damage was to my clothing and my pride: the fall had happened just across the road from the lay-by, in which was also parked a rep-type car containing a rep-type person. Eating his lunch, listening to the radio, and gazing out of the window at interesting things.

Me, in other words.

I somehow found enough purchase to get to my feet without too much more mortifying slithering, tossed my curls, and strode to my car with as much insouciance as a middle-aged mud-wrestler could reasonably be expected to muster. This, said my look, is simply the kind of thing that happens to a Serious Photographer, and dealing with it is all in a day’s work. I cleaned the worst of the mud off my hands with wet wipes from the glove compartment, then opened the boot and with a flourish produced the black bin bag I normally use as a boot liner when transporting plants home from the garden centre. I put the bin bag on the driver’s seat and myself on the bin bag, performed a perfect hill start, and set off for home in some style, I felt.

Just over the brow of the hill I started to realise that in trying to protect the camera while falling I’d actually hurt myself quite a bit, and then I started to shake from the shock; and approaching the next cross-road I stalled the car quite badly – to the consternation of a driver who had come up rather too close behind me. By the time I got home R was already back from his morning meeting, and having watched me limp up the path and then do a slow pirouette in front of his study window he administered appropriate amounts of tea, chocolate and sympathy, and suggested that a hot bath might be helpful.

We were supposed to be going to the cinema this evening, but I just didn’t feel up to it, so we stayed home and watched The X-Files instead – you can’t beat an hour of utter tosh when you’re feeling sore and sorry for yourself. I’d been hoping to get to a blipmeet at Whipsnade tomorrow, but I don’t somehow think I’ll be doing that either – four hours of driving is probably not what I need right now. So all in all I’m pretty cross with myself. But on the plus side, the camera is fine!