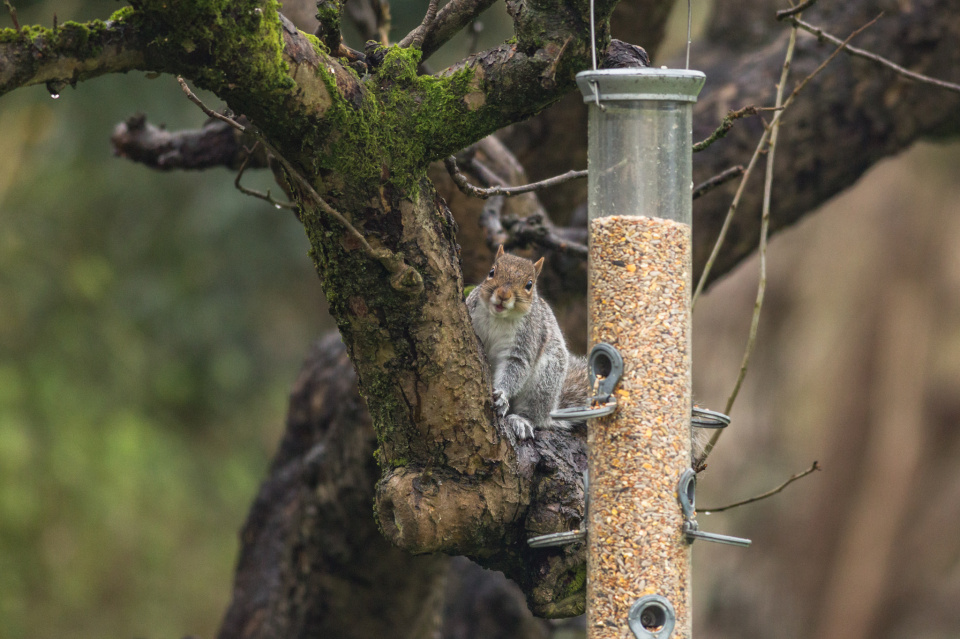 “Who are you calling fat??”

It finally stopped raining at breakfast time today, and for a while the sun even came out. After breakfast I tried some more bird feeder shots from inside the conservatory – I’ve posted the few that I kept on Flickr, starting here. They were all taken with the 70D, and though the set was a big improvement on yesterday’s I decided to find some time to try again with the 5D, which has a better focus system and produces sharper images.

But first R and I had another appointment with the apple tree. We pretty much finished the pruning – though the trouble with pruning, of course, is that every time you stand back and take a look you see another piece that could do with trimming – and lugged a huge quantity of wood down into the swamp that is the far garden. That’ll teach me to wear decent jeans in Worcestershire in winter.

While I was cooking lunch the sky darkened dramatically, and then a huge hail storm struck, followed by sleety rain, and then just rain. And more rain. It seemed as though we were stuck inside for the rest of the day, so after we’d eaten R helped me to make marmalade. I was waiting for the preserving pan to come to the boil, and glancing outside I saw that there was a break in the downpour and all the feeders were crowded, so I fetched down the 5D – by which time this squirrel had chased everyone else off the seeds. I think it might be Zorro, but he’s so porky now it’s hard to be sure: think Antonio Banderas in a furry fat suit.

This evening the Beeb’s War and Peace ended, to my great sadness. I loved the book (in fact I recently downloaded it onto my Kindle so I can read it again without having to lug 800 pages around with me), and this has been the best adaptation I’ve ever seen. Paul Dano in particular was wonderful. We had to turn the volume of the television up so we could hear it properly, because there’s currently a huge storm swirling round the house, bending the roof and the front windows.

And it’s raining in the conservatory again. Sigh.