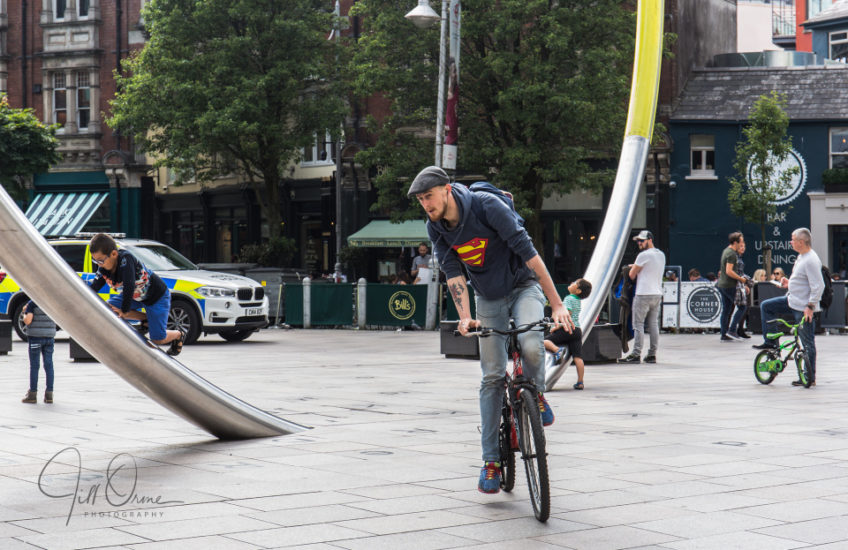 “It’s OK, Officer: Superman’s got this one.”

R and I went to Cardiff today, to have lunch with L and G, and G’s parents P and M. The journey down was like some kind of [i]Hunger Games[/i] challenge, on account of the Powers That Be having chosen to shut a section of the M4 on a day when there was a food festival happening in Cardiff Bay, and route all the west-bound traffic through Newport; and NCP, not to be outdone, having closed one of the main city centre car parks. By the time our 45-minute contingency had evaporated and we were actively late, R was beginning to make the kind of noises that make you wonder where the nearest defibrillator might be located – but luckily it transpired that P and M, though coming from a much shorter distance away, had also been caught up in the chaos, and quite by chance we wound up parking in the same car park at almost exactly the same time, and bumping into each other in the street. Having travelled into town by bus, L and G were way ahead of us, but that did at least mean that they’d secured our table in the restaurant.

After this rocky start, you’ll be relieved to hear that everyone behaved very well: no-one threw food or insulted anyone else, and we found lots of things to talk about and agree on. Afterwards, one of the things that P and I agreed on was that we were very clever to have produced such lovely Offspring; and another thing we agreed on was how lucky the children were to have such marvellous parents. With hindsight, I think I now know who drank most of the second carafe of wine.

Anyway, stepping around that, this was taken in the pedestrian precinct outside the restaurant, which I think is called The Hayes. I was trying to get some surreptitious shots of the children making inappropriate use of this piece of sculpture (you would though, wouldn’t you? I’m sure L would have climbed it if I’d asked her – and actually, given my wine consumption, it’s probably as well that it didn’t occur to me to climb it myself), when I spotted Superman approaching on his bike just as the police car was also cruising through. The sculpture, should you care, is called [url=https://en.wikipedia.org/wiki/Alliance_(sculpture)]Alliance[/url], and probably represents something or other – but more importantly, you can climb it, and it lights up at night.

As if all this wasn’t good enough, on the way home I made a wonderful discovery – though you’ll have to wait until I have the time to go back and photograph it to find out what it is.