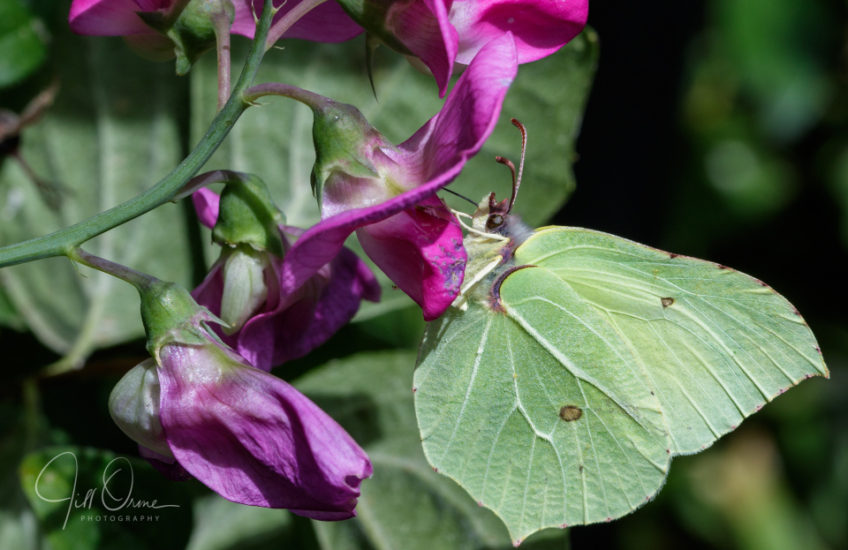 I had Stuff to do today which kept me at my desk for most of the day, and I only had time for a short garden safari in the early afternoon.  Luckily I already knew before I left the house that there was a Brimstone about, because I’d seen him from various windows at different times during the morning, and as soon as I stepped outside I spotted him again, fluttering around the perennial pea.

I love these butterflies: they’re so beautifully camouflaged as leaves that if it kept still you could easily walk past one without noticing it; and yet they’re also rather psychedelic, with their strange grey/pink/mauve fur and pink antennae. By choosing to feed on the pea this chap has colour-coordinated himself strikingly well. Brimstones are among our longest-lived butterflies, with a life-span of up to thirteen months, so they’re frequently the first butterflies you see in spring, and they’re on the wing well into the autumn. They produce just one brood, in the late spring and early summer, laying their eggs on one of only two food plants: common buckthorn and alder buckthorn.

Spring fliers are survivors from the previous year’s brood which hibernated as adults, and on emergence they’re highly focused on finding breeding opportunities, which means that they barely ever settle and they’re a demon to catch up with and photograph. From his pristine condition I’d say that this is a fresh specimen from this year’s brood; his focus is on feeding rather than on girls because he has to build up his fat reserves to see him through hibernation. Females look very similar to this, but are much paler – in flight, when you can’t see this distinctive wing shape, it’s easy to mistake them for one of the Whites.

My extra today is also pretty well camouflaged, but I was lucky enough to see it come down among the roses, and by dint of trampling several plants which won’t thank me for it, I captured one decent shot before it took off again and disappeared. The fact that the blue spots on the distal segments of its abdomen are joined across the mid-line identifies it as a Southern Hawker; and I think, though I’m not certain, that the fact that its abdomen is thick, with no “waist”, means that it’s a female. 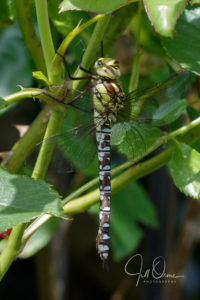