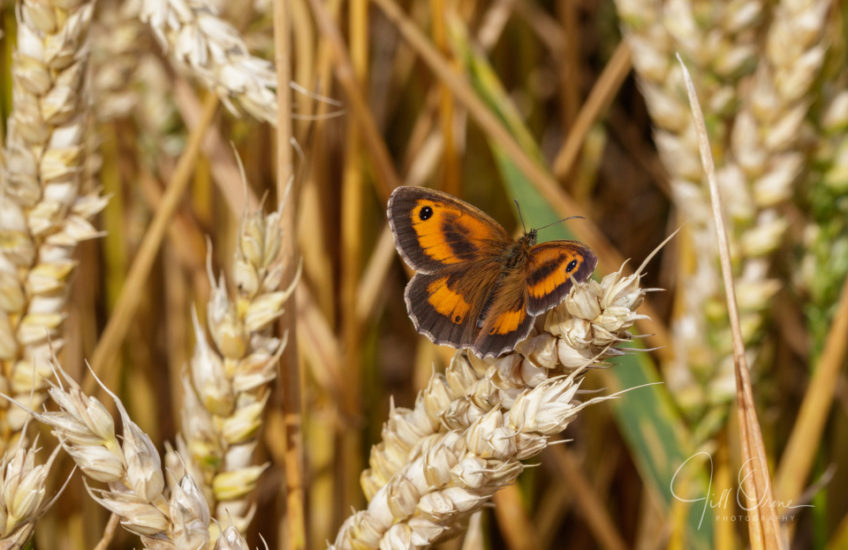 That’s the noise of me ticking a new species off my butterfly list – not this Gatekeeper, but a White Admiral; sadly though, it was very old and battered, and didn’t make a particularly good subject for anything other than a record shot, whereas I think this little chap looks rather fetching posed on the wheat.

This morning I spent a thoroughly enjoyable few hours in Grafton Wood, a site which is owned and managed jointly by Worcestershire Wildlife Trust and Butterfly Conservation. It’s the last remaining Midlands stronghold of the rare Brown Hairstreak butterfly, but it’s still a little early in the summer to be sighting those, so I wasn’t surprised not to see any. It’s also home to the Silver-washed Fritillary (as photographed by Hillyblips at a different site yesterday), which I sadly failed to find; and to the White Admiral – which was completely unmissable, on account of being the size of a small bird, and gliding about like a frisbee. It’s a surprisingly shy species though – or maybe it’s not surprising that something so noticeable should want to keep itself to itself; I saw several, but only managed to get focus on two, one of which was about 50m away, and the other so battered as to be almost pitiful.

As well as the Admirals there were abundant Meadow Browns, Ringlets and Gatekeepers; Large and Small Skippers; Small, Large and Green-veined Whites; Peacocks and Commas; and fresh male and female Brimstones. I wasn’t especially looking for dragons, but happened across a Ruddy Darter, several Southern Hawkers and a Banded Demoiselle; and there was also a plethora of bees, flies, hoverflies, and beetles and bugs of various kinds. I’d really love to walk this wood with someone who could teach me to identify the many interesting insects, plants and flowers that I saw today without being able to put names to them! I’ve started a Grafton Wood album (which includes the old White Admiral) here if you’re interested.

Before I go, I have hedgehog news for those of you who’ve been concerned about the underweight, dehydrated one that R and I took to the Vale Wildlife Hospital a couple of weeks ago. Having been admitted at 375g he’s now 475g (cat food is the answer to the question you’re all now asking), and is coming to the end of a course of medication (I assume antibiotics) which he was given because he appeared to have a minor wound when he was admitted. He’ll shortly be moved to a pre-release pen, with the expectation that he’ll be fit to go back into the wild in another couple of weeks. At which point in the conversation I asked if they would simply release him close to the hospital, and the young woman at the other end of the phone said “Well – that depends…” “On….?” “On whether you have an appropriate garden, and whether you’d like to have him back. Possibly with a friend.”

Why yes – as it happens, I do have a hedgehog-appropriate garden, in that it’s extremely untidy, with what to all intents and purposes is a wild hedgerow at the far end of it. It’s also now hound and terrier-free of course, which means that a hedgehog (or two) could potter around it without being mercilessly hunted. So I’ve said that we’ll be happy to fetch him (with girlfriend if they so decide) when he’s ready for release. Which is rather nice.