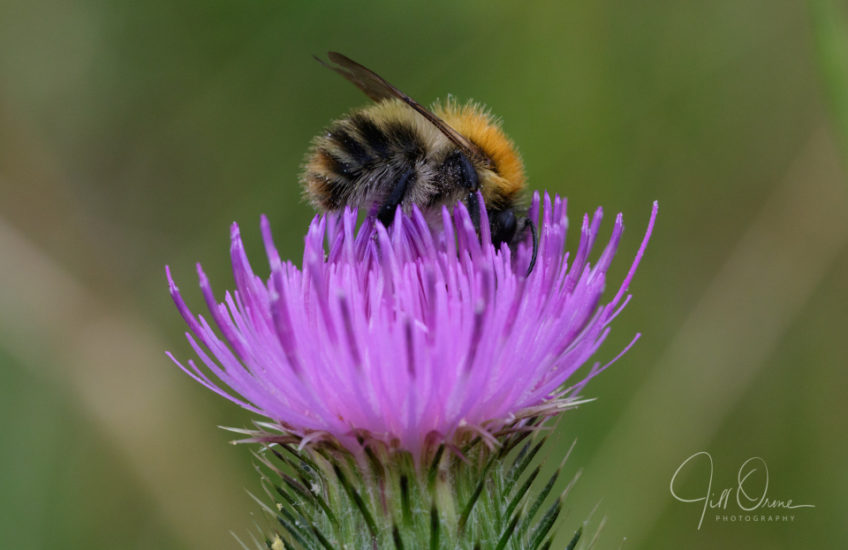 It was an odd kind of day: heavy, and threatening rain, but with no actual rain falling despite the fact that thunderstorms were forecast. When I went for my photo walk (or limp, to be be more accurate – I don’t know how far I walked yesterday, but today my thighs were howling in protest) I took a camera bag with me which contained nothing other than a spare battery and a mac-in-a-pack; the fact that I carried them round the parish almost guaranteed that I wouldn’t actually need either.

The butterfly field was eerily quiet, and almost deserted: it seemed that the bugs were also expecting trouble and had pre-emptively taken shelter. Despite the dearth of subjects I took a few photos that I quite like, including some rather free-form ones of grasses and barley which are outside my normal range of nonsense, and could have been blipped for that reason alone. But in the end I couldn’t resist this Common Carder, valiantly bumbling away while almost everything else was safely back at home with the shutters pulled down.

I know I’ve said before how fond I am of this particular species, but I think it’s a while since I last posted a photo of one – which is a good enough reason to do it again now. I could easily be wrong, in which case someone will almost certainly put me straight, but I’m not seeing pollen baskets on the rear legs here and therefore I think that this is a male; if so, his only function is to mate with the newly-emerging, prospective queens from this year’s nests. In the autumn the males, workers and old queen from each colony will die, and the new, mated queens will hibernate, emerging next spring to found their own colonies.