Apologies for the distance, and the light, but this was just too good not to photograph.

Being a fairly chaotic person I don’t have many rules for life, but one that has stood me in good stead is Never eat anything bigger than your head. I’m fairly used to seeing cormorants and great crested grebes failing to follow this valuable piece of advice, helped by a special hinging mechanism of the jaw and an elastic throat – but when I saw this tableau I was pretty sure that on this occasion the grebe had been over-ambitious.

The fish wasn’t struggling – which isn’t always the case – but even so the grebe was having trouble hanging on to it, and there didn’t seem to be any way that it would manage to lift it out of the water and swallow it. For several seconds the only movement was my camera shutter, and what looked like a slow but inexorable slide of fish back towards water. And then another grebe muscled in, and there was a chase – even if it couldn’t work out what to do with its prize, this bird wasn’t ready to hand it over to anyone else. Trying to capture the scene in the twilight was ridiculous, but I had a go anyway, and I’ve put one photo in as an extra. 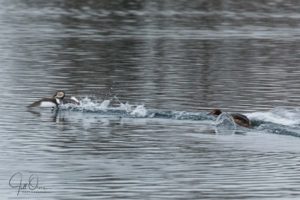 I did feel quite sorry for the poor creature, trying to get away from an attempted mugging while encumbered with this huge burden, and in the end the pursuit went too far across the lake for me to be able to see the outcome – but I doubt it ended well for any of the parties involved.

I then stood for several minutes watching another grebe diving repeatedly, until eventually it too came up with a fish, and happily this time one that it was able to swallow. By this time it was really dark, but there’s a sequence of shots here, if you’re interested. In common with other birds that swallow fish whole, the grebe positions its prey so that it goes down the throat head-first, which flattens the fins and stops them damaging the bird’s oesophagus. The next three sections of its digestive tract are the crop, where excess food can be stored so it can be digested over a period of time; the proventriculus, which secretes acid, mucus and enzymes to soften and begin to break down the fish; and the gizzard, which is muscular and grinds up the softened flesh.

Great crested grebes (along with other grebe species) are known to swallow some of their own feathers during preening, and it’s thought that these are mashed up to form a kind of felt inside the gizzard, to protect it from damage while the digestive system is working on fish bones and fins. It has also been suggested that the feathers help in the formation of pellets, allowing the grebe to regurgitate matter that can’t be digested.