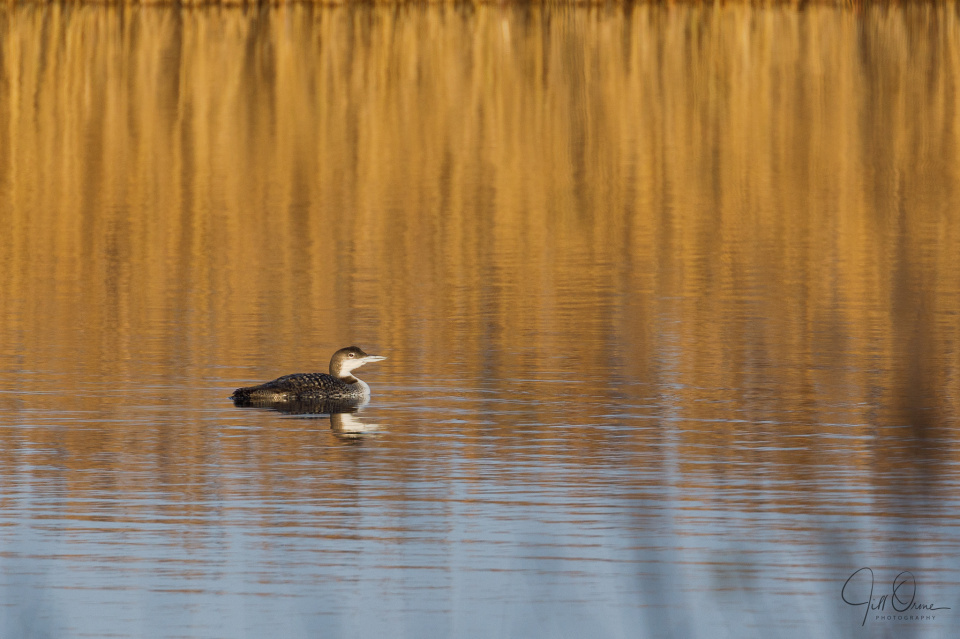 Another day, another Great Northern Diver – but this time in lovely light. Getting up to the first nice day in what felt like weeks, I zoomed off to Lechlade in search of the second of the two GNDs currently resting and feeding up in the Cotswold Water park – and in the process of tracking it down, on a lake with quite limited access, found a number of other nice things as well: a male Goldeneye, and some Pochards and Gadwalls.

The Diver was definitely the star of my day though, despite it being quite active, and at a fair distance, and there being a lot of annoying shrubs and saplings lining the lake – so that quite a lot of scuttling up and down the path was needed, to get viewpoints that would give reasonable shots. I definitely think it repaid the effort though, and I hope that you do too – it’s such a handsome bird, and was set off really nicely by the gold and blue reflections on the water. I love its markings – especially the marks on its back that look like squiggles – and I’d say that it’s already beginning to move towards its summer plumage.

It’s also a very efficient hunter, and seems especially fond of crustaceans; I’ve put a sequence of shots of it dispatching one on my Facebook page, if you’d like to see them. When it first surfaced it ducked the prey quite vigorously – I don’t know why, unless it was to stun it; then it dipped it more carefully a couple of times, changing its grip slightly each time, before finally swallowing it. I have two more sequences of it feeding, and it followed pretty much the same pattern each time. This image was taken while it was drifting quietly after two successful dives – but it only took a short break before returning to the hunt.