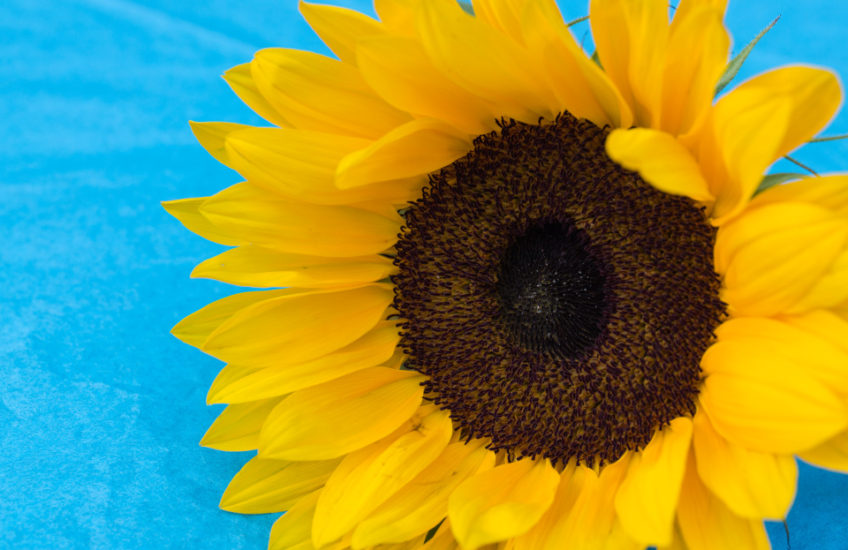 Well, actually it wasn’t all that sunny for much of the day, though it improved towards evening. But I’d decided to have a quiet time at my desk today, after all the gadding about I’ve been doing for the last few days and with a busy couple of weeks coming up, so it didn’t much matter that it was a little gloomy outside. However, after initially shooting this sunflower on a black board, I thought that I rather fancied seeing it against a vivid colour – and after trying it against an old piece of turquoise tissue paper I had lying around, I realised that I much preferred the more summery version.

On the subject of colour, I had a bit of an OMG moment this evening when I was processing in Lightroom, and realised that the Develop module is over-expressing colours. This, for example, looked crazily oversaturated in the Develop module, but quite normal when I took it back into the Library; and when I flattened the colours to what looked acceptable in Develop and then exported it, the jpeg was dull and desaturated. I then took another look at yesterday’s photos of Witley Court, in which all the greens had seemed insane when I was processing them, and realised that I’d over-flattened them – so I quickly restored the greens and re-exported, and now the jpegs look fine. It’s rather irritating, because having looked back through August’s exported photos in Picasa I would say that this has been going on for at least a couple of weeks without me really noticing; so tomorrow I’ll have to go through all those files quite carefully and reprocess them as necessary. Now that I’m aware of the issue I can work around it – but I’m not all that happy about it and I hope that Adobe are aware of the issue and sort it out in the next update.

Have a nice weekend, good people!