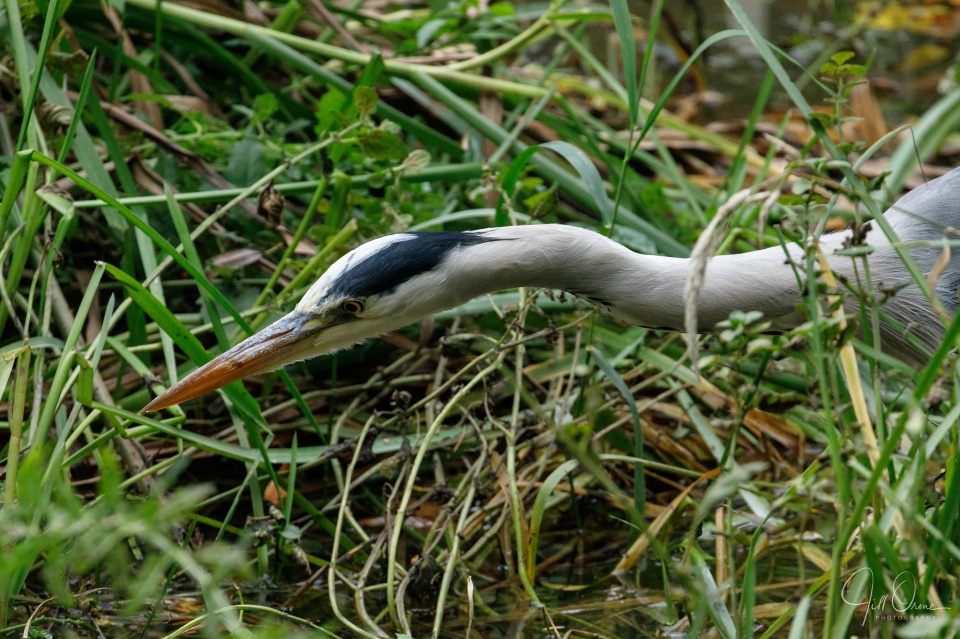 Imagine finding yourself on the receiving end of that stare….

The weather forecast predicted sunshine in Stratford this afternoon, and I decided to believe it and went off to walk along the river. And indeed, the cloud did break – but not until 5pm, when it was almost dusk, and I was on my way back to my car. For most of the time I was there the river was shrouded in deep gloom, but I wasn’t, because I was out and about, and there were birds to watch.

This is one of two herons I saw today. I think it’s probably the same one I photographed last Wednesday, because when I first saw it it was standing  in the same place, on the island approach to Stratford Lock, peering into the water. It’s probably the boldest heron I’ve ever encountered: when it noticed me watching it and taking photos it stared back at me for a while, and then took off and flew over to my side of the river, landing in thick vegetation under some trees at the bottom of the bank, just a little way along from where I was standing. I walked along the path until I was directly above it, and then stood by one of the trees – no more than ten or twelve metres away from the bird – for more than half an hour, watching it hunting. Every now and then it would turn and fix me with its death stare, but mostly it ignored me and it clearly wasn’t frightened, either of me or of all the other people who walked past, some of whom had dogs with them.

When I felt that I’d taken every possible photo I went on into town, noting as I passed the theatre that the tufted duck count has now risen to fourteen. By the time I retraced my steps, an hour later, the heron had gone from this spot, but the two sections of the weir were now elegantly decorated with a heron apiece. I’m old enough to remember when seeing even one heron was a notable event, but these days it’s only mildly surprising to find two in such close proximity. They require unpolluted water though, and their recent success will only continue if the water quality in our rivers and streams is protected and preserved.