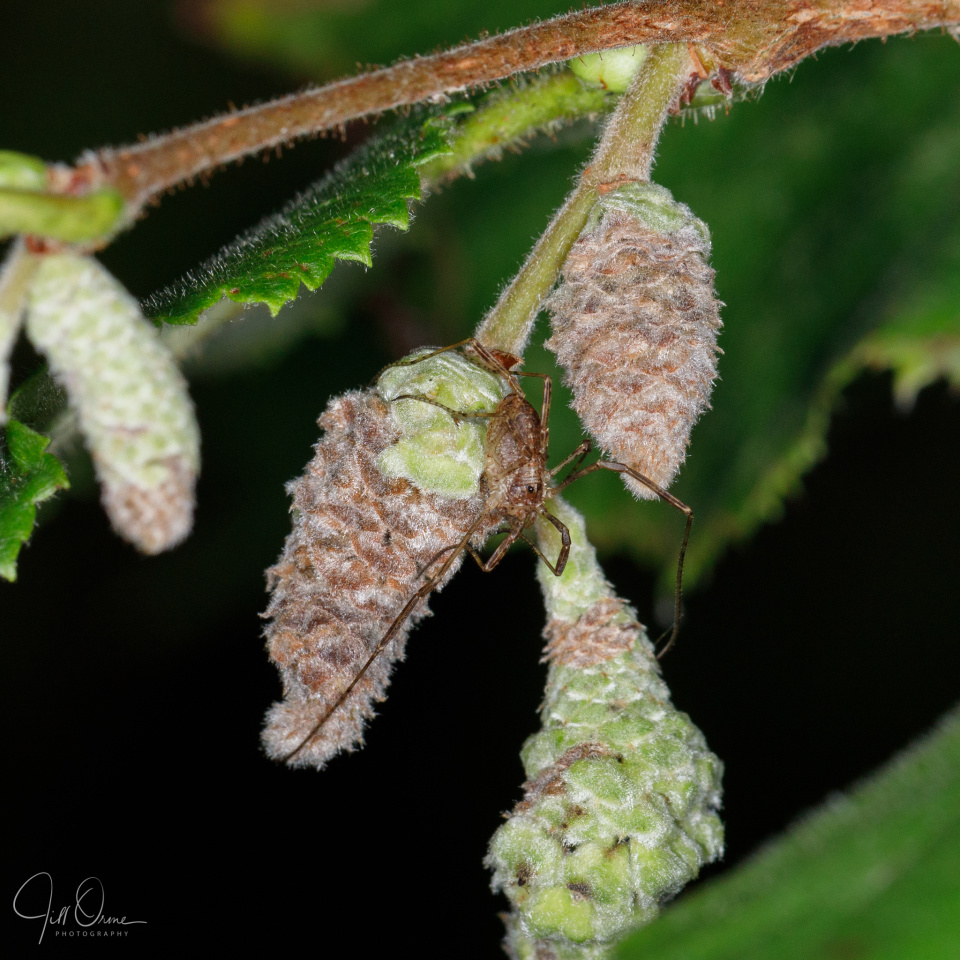 I’m quite sure the neighbours think I’m mad, fossicking around in the undergrowth in all weathers, poking my nose into crevices in trees, and shining a torch on the underside of leaves to see what might be lurking there. But they’re mostly too polite to say anything – though I did get a very English, passive-aggressive “Can I help you?” from some guy who was in the process of moving into the village a couple of weeks ago, when I was out looking for ivy bees (having considered this for a moment, I gave the most annoying response I could think of, which was “No.”).

Anyway, as I said the other day, my searches are proving steadily less fruitful as the autumn wears on, but I did have quite a good day today, invertebrate-wise. I’ve chosen this photo because it contains two points of interest – to me, at least.

Firstly, these are hazel catkins, and as you can see, they’re misshapen. This means that they’ve been attacked by one of two possible parasites, and the tree’s response has been to form galls. The culprit here is either a mite called Phyllocoptruta coryli, or a midge called Contarinia coryli, and I’ve been told by someone who knows much more than me that the rough shape and raised scales suggest the former. The only way to tell definitively though, is to dissect the gall to see whether it contains mites or midge larvae, and that won’t be happening, because I’m not an entomologist, and I don’t consider that my right to get a photo or a record trumps the right of another creature to live its life unmolested.

The second notable thing is that the harvestman on the middle gall is one I’ve never recorded before, and it’s always nice to make a new discovery in the garden. I can’t actually be certain of its identity, because it’s not especially well marked, and I couldn’t get close enough for detailed shots of either its face or its genitalia, which might have decided the matter. But I’m told that it’s either a Paroligolophus or an Oligolophus (how excellent are those genus names??!), and as there was another harvestman a couple of inches further along the twig which has been confirmed as a Paroligolophus agrestis, I’m going to hazard that this is another of the same species – the second, larger, better marked specimen a female, and this one probably a male.

Paroligolophus agrestis is one of the most common harvestmen in the UK, even if I’d never photographed one before. It occurs right through the British Isles, with the exception of Shetland, and in Europe is found from Scandinavia down as far as northern Spain. According to the Spider and Harvestman Recording Scheme, it can be found both on the ground and up in the tree canopy, and in all months of the year, and its diet includes springtails, aphids, fly and lepidopteran larvae, ants, woodlice, snails and bird droppings. Personally, I’d go with the aphids and lepidopteran larvae, and leave the bird droppings for someone else.