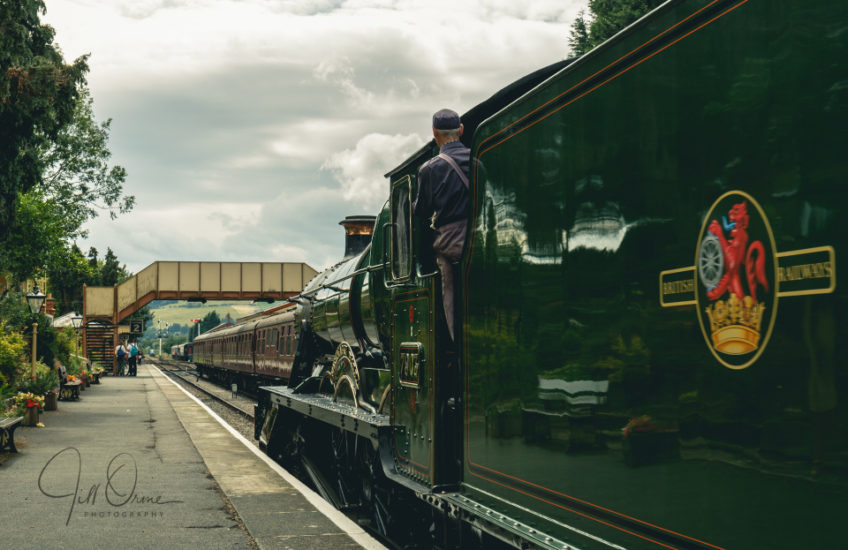 Several times while I was walking the Prestbury Hill Butterfly Reserve yesterday, I heard the sound of a steam train whistle, which reminded me that I’d been intending to go and play on the Gloucestershire Warwickshire Steam Railway. And today was another reasonably bright day, so off I zoomed to Toddington.

The first thing that struck me when I got out of the car was the evocative smell – in my childhood all railway stations smelled like this. In fact the road where we lived smelled a bit like it too: when I was very small my family moved to a little market town in Lancashire, and our road ran alongside a railway track. I can remember seeing trains running behind the houses on the other side of the road to ours, though I must still have been quite young, because the line was closed in the Beeching cuts in the early 1960s. Once the track was abandoned it became quite overgrown, and was probably a haven for wildlife, but I remember it as the place we were not supposed to go and play (why, I don’t know – life was full of bizarre and illogical restrictions, it seemed to me), but (naturally) did. There was quite a deep road bridge running across the track just beyond the end of our estate, which we thought of as a tunnel, and it had the same smoky, oily smell as the station at Toddington.

I bought a Rover ticket, which allowed me to get on and off any of the trains that were running today on the route back and forth between Buckland and Cheltenham Racecourse. I had thought of taking the little diesel railcar which runs northwards over the [url=https://www.blipfoto.com/entry/2086938246469652391]Stanway Viaduct[/url], in the hope that there might be a curve on the track that would allow a good view of the structure, but I asked one of the volunteers if this was the case and he told me that it wasn’t – one day I will manage a decent photo of that viaduct, but it was clear that today wasn’t going to be that day. So I just rode the main train down to Cheltenham and back, and pottered around the stations taking far too many photos. And had coffee, of course. And cake.

The main photo here is engine 7903, Foremarke Hall, coming alongside the carriages it was going to pull, before backing up and coupling to the south end of the train. My processing is usually pretty conservative, but for this shot I thought it might be fun to play with a retro look, so I’ve split-toned it and added a slight matte. After the engine was backed up and attached I asked the driver and fireman if I could photograph the cab, and they invited me to climb up and take a look, provided I didn’t mind them getting on with their lunch. It was very interesting, but very hot, and I didn’t want to disturb their break by asking a load of questions, so after they’d pointed out a few things to me I just grabbed a couple of shots – of which I’ve added one as an extra – and got out of their way. There’s also a shot here of the front of the engine, which I took on my phone and posted straight to Instagram. 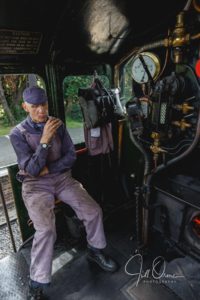 I’ve never been any kind of a train buff, but I thoroughly enjoyed the GWSR. All the volunteers who staff it were friendly and knowledgeable, the ride was fun, and the trains and stations are marvellously photogenic, if a tiny bit – shall we say? – Brexity. I daresay I’ll be doing an album of my photos when I get round to finishing culling and processing them; and I have a feeling that this won’t be my final visit.