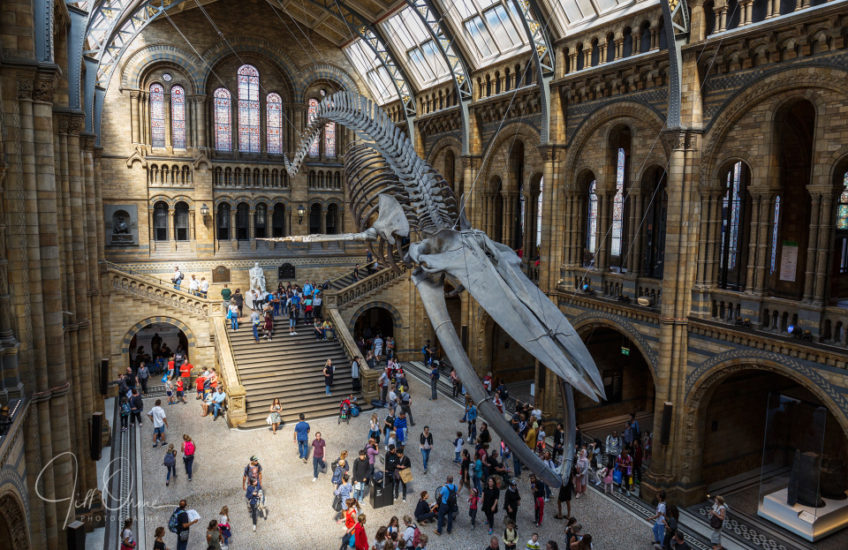 R and I had a Very Big Day Out today.

Leaving home at Seriously Though? O’clock, we drove to Warwick and took a train to Marylebone, then tubed down to South Kensington.

Coffee and (to die for) cake at the V&A.

The Wildlife Photographer of the Year exhibition at the Natural History Museum – which was, I thought, pretty good this year; though I muttered darkly a few times about baiting, and about hoping that the judges took a look at the competitors’ raw files before shortlisting them. My favourite photo, I think, was a very simple but beautifully executed shot of a corvid peering into an overturned bottle to see if there was anything edible inside it.

The NHM itself was hell on a stick – of course, because it’s the school summer holiday – made worse by the fact that every route you take to try to find an exit seems to send you back round to somewhere you’ve already been. I’m sure there are good security reasons why you can’t just go in and out through the front doors any more, but the fact that they’re blocked off offends me both aesthetically and practically. This is the blue whale skeleton in Hintze Hall (which for many years housed the Museum’s cast of an American diplodocus skeleton) – I photographed it from several different angles, but especially liked the light falling across this view.

Back to the V&A (when we finally managed to extricate ourselves), for tea:

Earl Grey tea (you’ll be relieved to hear) was provided.

Then we walked – for what seemed like good reasons at the time – to Trafalgar Square, arriving at the National Portrait Gallery in time for more café.

The Encounter exhibition – small, but perfectly formed. I’d expected to love the Holbeins, and did, but discovered some other talented artists I’d never heard of – notably Annibale Carracci.

The BP Portrait Award – very good this year (and free): if you’re in London before 24th September, I recommend it. I loved this; this; this; and this – but also admired a number of others. All the exhibitors are listed here.

An early dinner at Côte on St Martin’s Lane, where they fitted us in despite the fact that they were rammed and we didn’t have a booking, and served us quickly enough to get their table back inside an hour.

And then we walked again – on legs which were now grumbling – through Covent Garden and down past St Clement Danes, and along the river to St Paul’s for one of their Summer Lates sessions. I’m not convinced that it was worth the entrance fee – though it’s hard to begrudge it, given how much it costs to maintain a building like this – but I did get some quite interesting photos, which I’ve posted here.

Tube back to Marylebone, where R sweet-talked someone into changing our tickets onto an earlier train than the one on which we were booked. Home around 10.30pm, and tottered into the house on legs which unsurprisingly were now howling in protest.

Stats for the day from R’s Fitbit:

Everywhere I’ve been today, there have been multiple fresh Speckled Wood butterflies flitting about. This...

Someone told me today that I was looking in the wrong place for dragonflies. I...

It seemed too long since I’d been at Slimbridge (seven months, according to my photo...

Another Thursday, another visit to Croome with R, and another Migrant Hawker. He’s not as...

R suggested to me this afternoon that it might be an idea if I stopped...

I had my hair cut today, for the first time in eight months. My lovely...