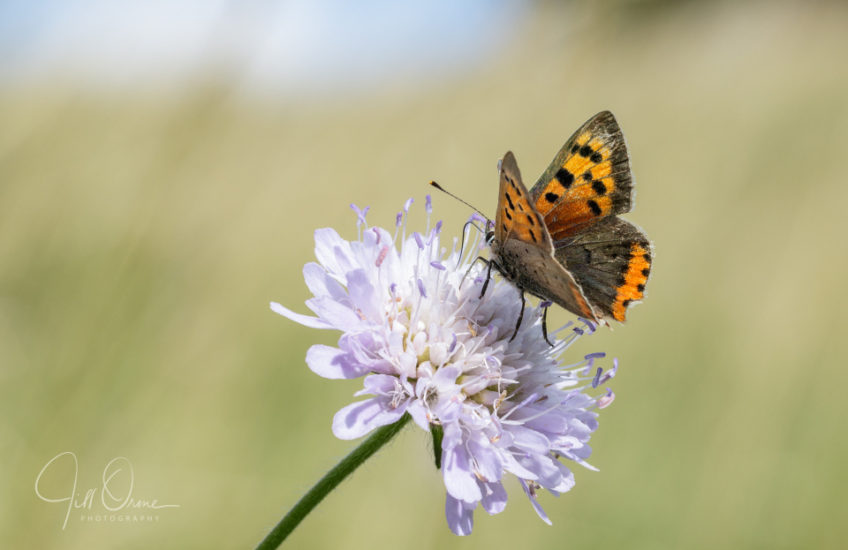 Getting up to a sunny morning, I thought I’d take another trip to Prestbury Hill Butterfly Reserve. It was colder and windier than on my visit last week, and there were less butterflies about: my haul for the day, apart from this Small Copper, were some Common Blues, a couple of Chalk Hill Blues, three Brown Argus, and a Meadow Brown; plus a Small Tortoiseshell and a Peacock which whizzed away too quickly for me to photograph them. There was no sign of the elusive Dark Green Fritillary, but I did also find a rather splendid moth (though sadly on a ragwort plant that was whipping around too much for me to manage pin-sharp shots), and some nice bees and hoverflies. Not a great bag at the end of a 40-minute drive, but I enjoyed walking the reserve, and kneeling on the steep limestone scree below this scabious so that I didn’t cast a shadow across it and disturb the feeding butterfly, I was conscious of being thoroughly happy.

As I pressed the shutter button on this shot I could hear a generic club-judge-type voice in my head saying, “That patch of sky at the top of the photograph is distracting – you’d have been much better framing this to cut the sky out.” To which I mentally replied “Pffft. What do you know? I like it with the sky in.” And I do, because it gives a real sense of the kind of day it was. I hope you like it too.

By the time I’d walked the upper part of the reserve I was quite tired, so I didn’t visit the lower section today; instead I called R from the car (amusingly getting almost no signal, despite being about 30 metres from a set of huge communication masts) and arranged to rendezvous with him for coffee at the Broadway Tower café. I’ll gloss over my cross-country drive between Prestbury and Broadway, which was hair-raisingly exciting (I think the satnav and I are going to have to have a little talk quite soon), but we had a nice time at the Tower, the view from which looked like this.