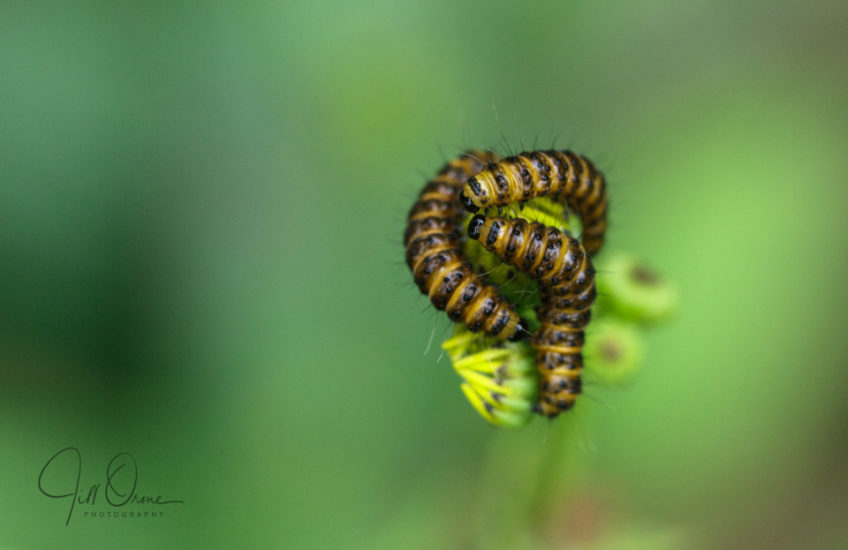 Around lunch time today I went out and searched the garden for something interesting to photograph, but didn’t find anything that pleased my eye. This put me in a Bad Mood, and as I was in a Bad Mood anyway, I thought that I might as well do some gardening.

By the time I’d fetched tools and wheelbarrow round to the front of the house I was in such a rage that I was behaving essentially like this, at which point R decided that he’d better stop working and come outside to give me a hand, before my head actually exploded. Between us we made fairly short work of the front border, which now looks less like a field and more like something intentional. I had my camera close by in case the Hummingbird Hawkmoth decided to pay a return visit, but sadly it didn’t show up.

After we’d cleared away debris and equipment we went to take a look at the ragwort. Yesterday there was one fat caterpillar left, but this morning there’d been no sign of it and I thought it had probably pupated; so I was contemplating digging up the plant, which by now is in a pretty sorry state. But as we searched for Mr Chubby, first R and then I began to spot tiny larvae – about half a dozen, less than 1cm long and still quite pale. I would guess that they’re second instar: when they first emerge from their eggs (which the adult moth lays on the underside of leaves) Cinnabar larvae eat in the immediate vicinity of the egg cases, and it’s only after their first moult, when they’re beginning to develop their protective warning stripes, that they emerge onto the stems of the plant to look for the buds and young leaves they favour. And it’s at this stage that they huddle together like this, in the invertebrate equivalent of a puppy lump; as they get bigger and hungrier they tend to spread out around the plant.

It’s very late in the season for a fresh batch of these caterpillars, and whether they’ll be able to find enough food value in what’s left of this plant to see them all through to pupation is open to question. If they can’t, the larger ones are likely to eat the weaker, which isn’t something I’d relish seeing.