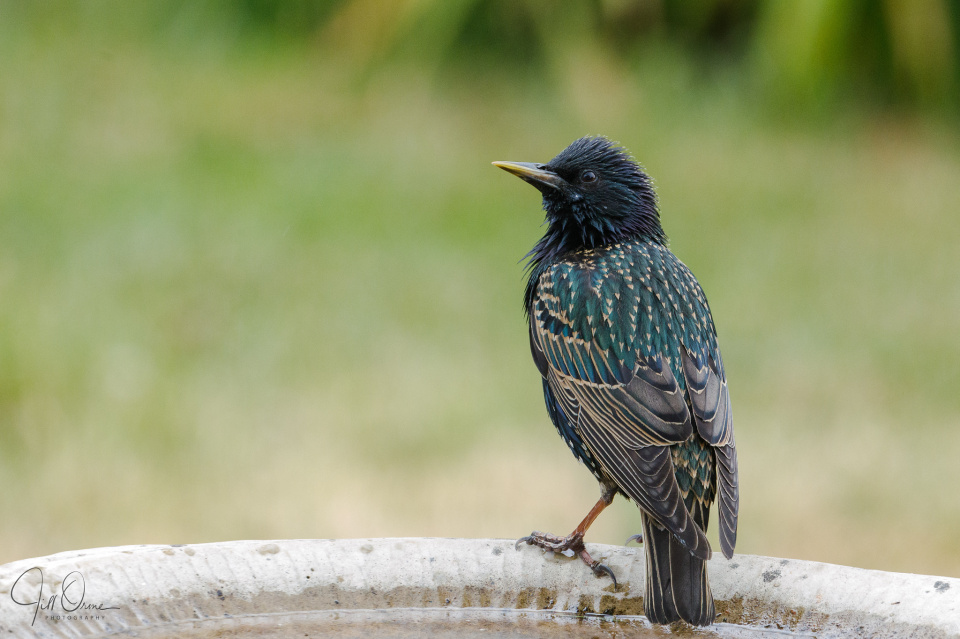 Just a couple of days ago, R and I were having a conversation about the birds that come into the garden, and the fact that some species seem to come and go. One that R mentioned was the yellowhammer: at one time these pretty little birds were regular visitors to our feeders, but we agreed that neither of us had seen one here for several years. Then this morning we were in the kitchen, and glancing out of the window I saw one on the lawn – which was a strange but rather nice coincidence.

This, you will have observed, is not a yellowhammer. I did scuttle off and fetch the long lens to record our welcome visitor, but only managed a couple of record shots before it flew up into the laurel (where we hope it has met some friends and decided to stay). But as I was about to put the camera down I saw this young starling watching the world go by from the edge of the bird bath, and I managed a few frames before it too flew away.

A lot of people don’t like starlings, but though I know that they’re noisy and messy, I have a soft spot for them. I can tell you that the pair who nest in the eaves above my study are very diligent parents: while I’ve been out in the front garden during the recent warm spell, looking for bugs to photograph, they’ve been flying in mouthfuls of my potential subjects every few seconds, to satisfy what sounded from the noise to be a substantial brood. I haven’t yet seen any fledglings, which are a dull brown colour, but noticeable because they carry on following the adults around for some time and begging loudly; this is a slightly older juvenile (so presumably from an earlier nest) that is already coming into its first winter plumage.

It’s a while since I last posted a bird, and this reminds me that although my 2020 list has suffered badly during lockdown, I do have a couple of species to add to it: I saw a reed warbler at Eckington when I was walking the river in search of dragonflies, and the other evening while we were having our after-dinner coffee in the garden, R and I had the great pleasure of watching a couple of swifts sky-dancing above the roof of the house. After battling with my conscience though, I’ve decided that I’m not going to add the grasshopper warbler I heard in the garden about a week ago, because I didn’t manage to track the call to an actual sighting before it flew away.