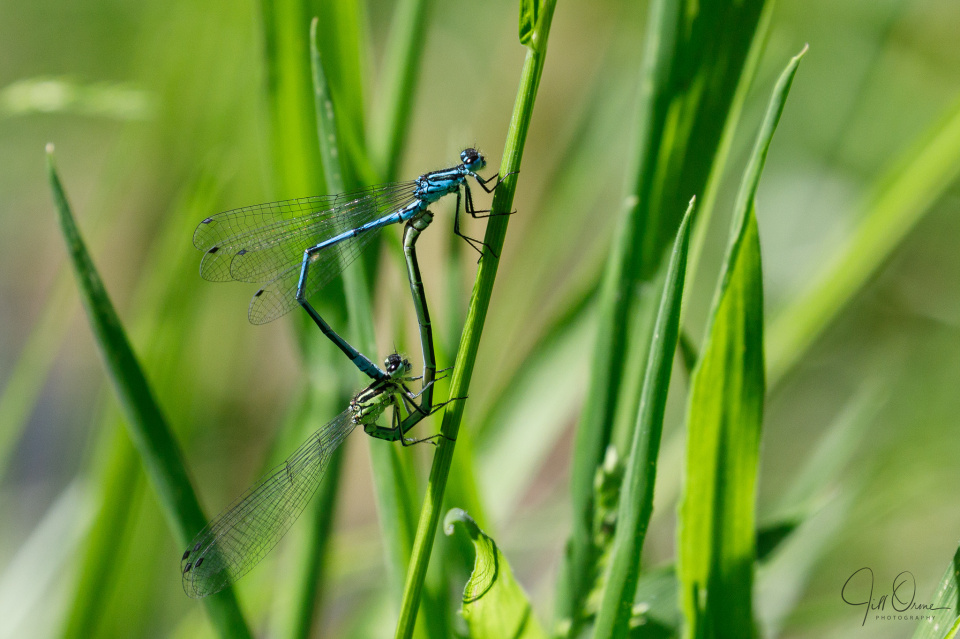 I’ve been battling with myself for the past ten minutes: this is one of the nicest photos I took today, but the extra is the most exciting. In the end I’ve decided to give the Azure Damselflies pride of place, partly because it’s Tiny Tuesday and they are indisputably tiny, and partly because R is enchanted by damselflies, and spends nearly as much time watching them as I do. He was standing nearby when I took this, actually, but couldn’t see this pair until I pointed them out to him, because of the way they’d positioned themselves in the grass by the pond – they seem to have an almost preternatural ability to blend in with foliage. 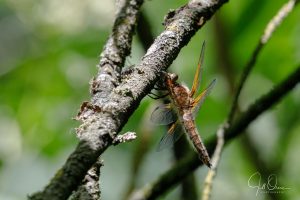 The extra is a female Scarce Chaser, and almost unbelievably, given that I drove fifteen miles on Saturday to photograph this species at Eckington, which is as close to home I’ve ever previously seen one, the tree is down near the bottom of our garden. I was there trying to get photos of a male and a female Beautiful Demoiselle (last week’s big garden discovery, if you remember), and cursing the fresh Speckled Wood butterfly that kept chasing them out of what he has decreed is his territory, when a large red something flew past me and into the old cherry tree – and luckily stayed there, while moving around just enough for me to home in on it and realise what it was. “Large” is a relative term here, of course – she’s about two inches long by three across her wing span; but that’s quite a lot bigger than, say, an Azure Damselfly. The angle (and the light) were truly awful, and I seriously considered scuttling back to the house for a step ladder, but before I could make my decision she flew into one of the tall willows on the bank of the stream, and even a cherry picker wouldn’t have helped me track her down there.

I’m really quite perplexed about this visitation. The Scarce Chaser is a river species, favouring slow-moving rivers with adjacent water meadows, and it doesn’t like shade, so the steep-banked, shady brook at the bottom of our garden is definitely not its ideal territory. There is a loop of the River Avon a mile or so from here, and it could be that my visitor emerged from there, and was simply flying around looking for other potential territory – in which case I expect that she’ll have crossed our village off her list by now, and moved on somewhere else. I certainly don’t expect to see Scarce Chasers in the garden on a regular basis, but I’m delighted to have been standing in just the right place to see this one, and I’m now wondering which sections of our local stretch of the river I might be able to access in the hope of finding them.