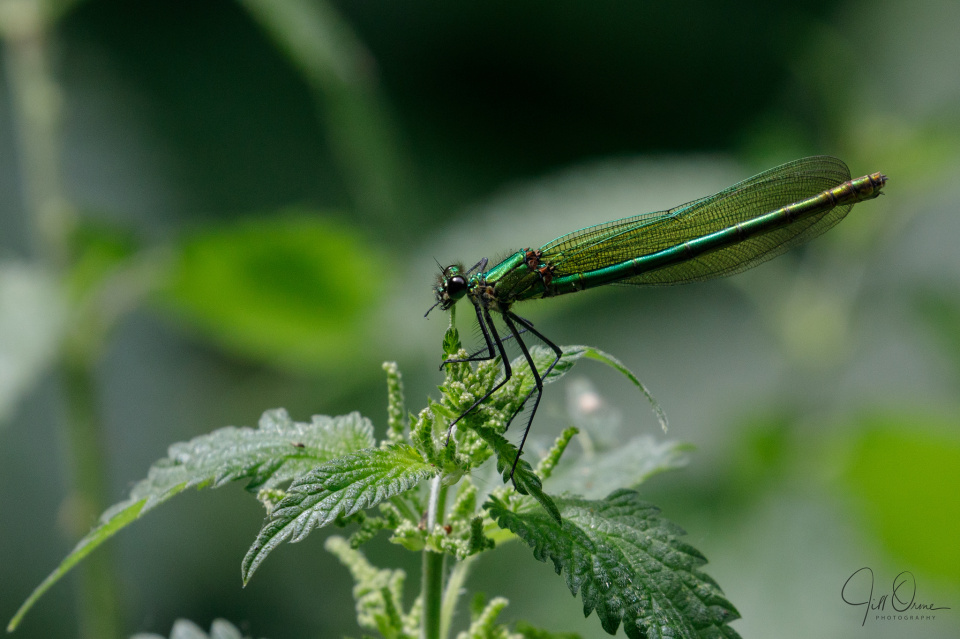 That is, a green female Banded Demoiselle in my main image here, and a gold (and green) female Beautiful Demoiselle in the extras. If you view them both full-screen and flick between them, you’ll easily see the difference. Surprisingly, this Banded female doesn’t have a white pterostigma, but if she did it would be closer to the end of the wing than the Beautiful’s wing spot. 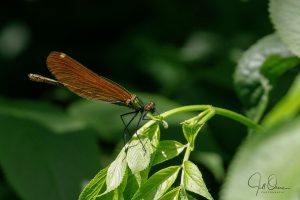 I was happier than I can easily express without adding a GIF of the Crash Bandicoot dance to this post that I had demoiselles to photograph in the garden at lunch time, because the bug walk I’d taken around the village this morning had been very disappointing. There seems to be a small ecological catastrophe under way: the butterfly meadow is parched and has hardly any flowers, and I didn’t find a single butterfly there – or much of anything else either. In fact my entire haul was a few thick-legged flower beetles, one 7-spot ladybird, a green shieldbug, and a white plume moth. Tilly’s field was a little better, with about half a dozen Meadow Brown butterflies, and some frantic bees nectaring on a patch of yellow-rattle, but even this is poor compared with other years. As I looked from the yellow fields to the lush flowers in the village gardens, I realised how important our tended and watered patches are likely to be for our local wildlife this summer.

Back at home I spent an enjoyable interlude with the lady demoiselles, and then stopped off to check on the wildlife pond on my way back towards the house. While I was counting damselflies R arrived, and we agreed on a tally of four pairs of mating and/or ovipositing Azures, and two skulking Large Red males. Just as we were turning to walk away, a male Beautiful Demoiselle danced through in a metallic shimmer of cobalt blue, though he was clearly on a mission and didn’t pause.

A little later I was sitting in the shade of a sun umbrella, watching the world go by, when a Small Tortoiseshell butterfly flew over the patio pond, dropped onto a water fringe leaf, and took a long drink of water. I posted its photo to Facebook, if you’re interested.