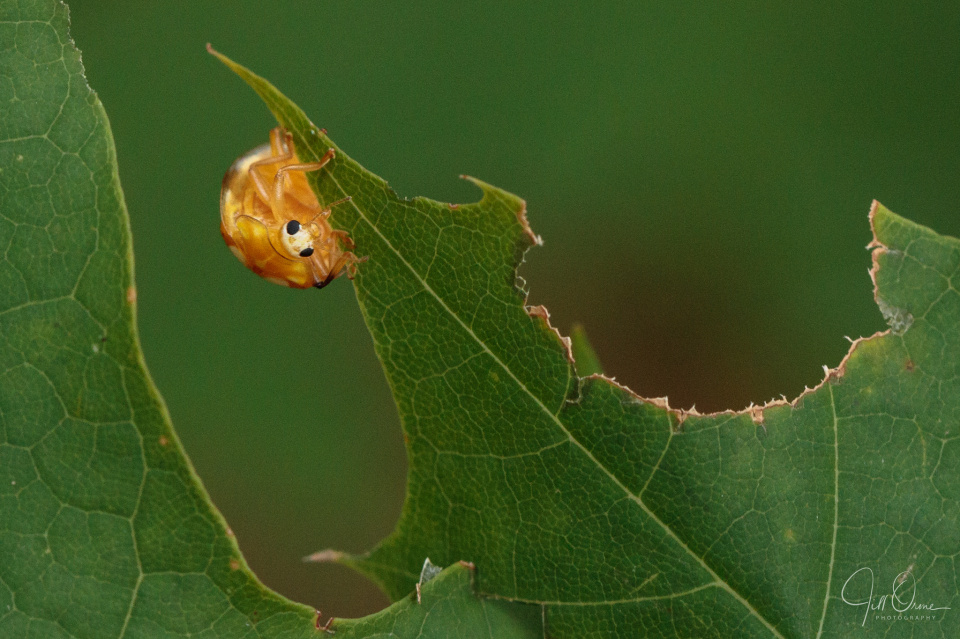 In these trying times, when life is limited and the days seem to blend into each other, it’s good to score some ‘firsts’ – and today I was lucky enough to record two.

It was an overcast and slightly dank day, but when eventually I put my nose outside the back door it was surprisingly warm, and I thought it was worth at least checking around the garden for invertebrates. I’d looked in most of the likely places without finding anything of note, and was starting to work back towards the house, when I spotted this orange ladybird, a species that isn’t at all rare, but which I’ve never recorded before. It was in a very dark corner of the wild garden and I wasn’t using flash today, so my shutter speed was low and my aperture wide: in other words, I’m not especially thrilled with either of these photos. But the second I stopped shooting and took my eye off it to check my images on the back of the camera, the ladybird removed itself to a place of safety, so if at the outset I’d taken the two minutes necessary to go back to the house and fetch the ring flash, it’s pretty much certain that I’d have missed getting any photos at all. I’m posting two images because I really like the little face appearing over the edge of the leaf here, but it’s hardly a descriptive shot if you’ve never seen an orange ladybird before, so the one below gives you a more standard, dorsal view. 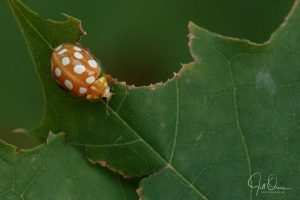 Orange ladybirds are one of our larger species, at about 6mm in length. They used to be regarded as a rare species of ancient deciduous woodland, but over recent years they seem to have adapted to feeding on a wider range of trees, and have become much more common and widespread. They mainly eat powdery leaf mildew, but will sometimes take small aphids. They’re similar to cream-spot ladybirds, but are larger and paler with fourteen to sixteen white spots, and it’s notable that the curved lateral edges of the pronotum and wing cases are translucent. Adults live for around a year, overwintering behind loose tree bark, or in the leaf litter at the base of tree trunks.

Once I lost my subject I wandered on around the wild garden, looking to see if I could improve on this nice find, and was soon treated to my second ‘first’. I was standing in the middle of a too-close group of four Norway maples which are due to be thinned over the winter, and glancing around the group to check that I was happy we’re removing the right one, I found myself exchanging eye contact with a treecreeper, at a distance of no more than about eight feet. We both froze and stared, for what felt like several seconds but in reality was probably only one, and then I lifted the camera fractionally and the treecreeper flew, immediately followed by a second one that I hadn’t noticed. One treecreeper would have been excitement enough, but given that these are largely solitary birds outside the breeding season, two suggests young adult siblings, and therefore at least one breeding pair.

In twenty years here I’ve never seen a treecreeper anywhere in the village, let alone on our property, but I’ve often thought about the suitability of this garden for them, and speculated that there might be some here, if one could but find them. Our plot is the best part of an acre, and only about half of it is viewable from the house; the furthest third, which we call the wild garden, is divided from the (notionally) planned and tended section by a screen of trees and shrubs, and it’s only since we installed a garden cam that we’ve begun to have a sense of the variety of wildlife that uses it. R reacted surprisingly well when I told him about my exciting encounter and suggested that our next garden enhancement should be a bird hide…