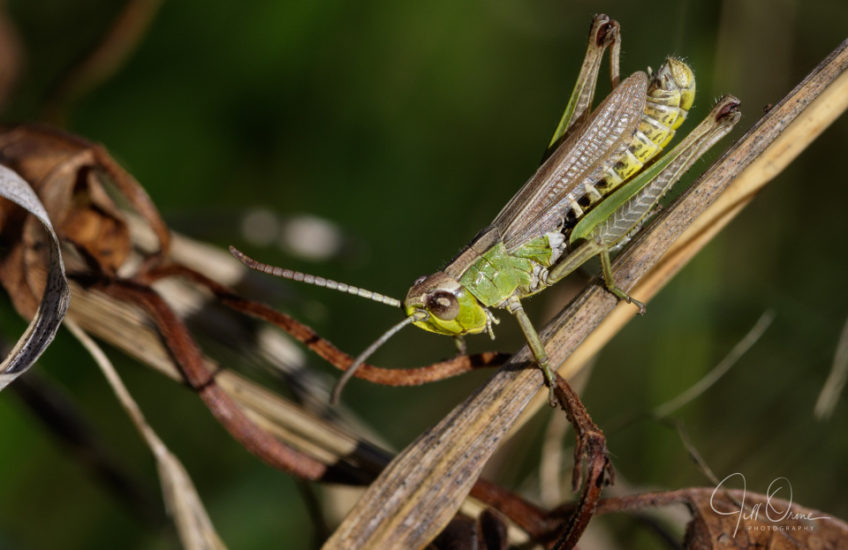 I did too much yesterday – of course – and after a restless night woke feeling rotten. But it was a beautiful morning, so I went off out for a walk straight after breakfast, hoping to shake off my megrim while scoring some early photos. I succeeded in both aims, but I think I may have to rename the butterfly field: I saw just two Small Whites in the entire field, and only managed to photograph some grasshoppers and a couple of hoverflies.

This little chap was not at all happy to have the Eye of Sauron turned on him while he was perfectly picked out by a strong beam of sunlight: he knew he was highly visible, and was in the process of trying to work his way down this stalk into the shadows when I took this shot. I’m not sure why he didn’t just spring, but his caution certainly worked in my favour; after this I went away and left him in peace.

Because I hang out in the Orthoptera Fan Girl Club on Facebook I recently heard that a specialist bug book seller in Cornwall (I know – I struggled to believe it as well, but it’s true) was having a summer sale, and as it would have felt rude to ignore their kind offer I now have a book on grasshoppers and crickets; but I didn’t need to consult it today, because this is the species I see most often here. He’s a meadow grasshopper (Chorthippus parallelus), distinguishable from the very similar lesser marsh grasshopper by his very dark rear ‘knees’ and the fact that his wings don’t reach the end of his abdomen; most females of this species have wings that are only about half this length and look faintly ridiculous.

It amuses me that the genus name Chorthippus is rather onomatopoeic – I think that’s probably why I have no trouble remembering it, even on days when I’d have to think quite hard to produce my own. If you’re as sad as I am, you might want to watch a short film of a meadow grasshopper stridulating, by rubbing his hind legs against his wing cases, here.