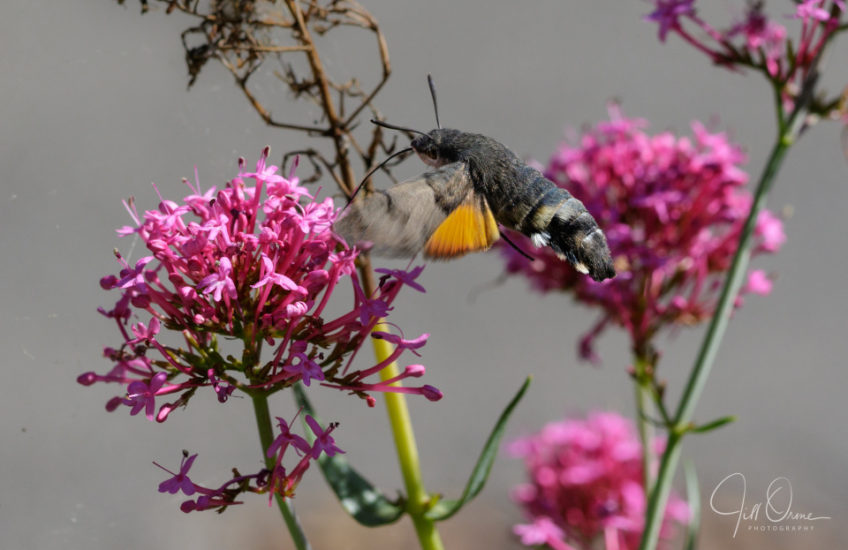 I was skulking around the garden early this afternoon, nursing very sore joints and a very bad temper, when I spotted him. The conditions were far from ideal: it was bright, with harsh, contrasty light, and a strong breeze was whipping the valerian around; as I think you know, these Hummingbird Hawkmoths are fast and skittish at the best of times, but when feeding from a moving flower they’re almost impossible to keep up with.

But whatchergonadoo? Walk away…? No – obviously not. Luckily, I’m trained – I can sit on command, and if you remind me some time I’ll show you how nicely I can balance a sugar lump on my nose – so I started firing off shots while steadily raising my shutter speed and ISO. I took 66 photos of him before he suddenly whisked away over the hedge into our neighbours’ paddock, and I’ve kept 7, which isn’t a bad proportion.

When I uploaded this one, my first thought was “Yes! Gotcha!”, and my second was… unrepeatable in polite company. I spent an hour in Photoshop trying various ways of removing that dead valerian head from the image, before deciding that I was actually making the photo worse rather than improving it. Then I spent 30 seconds in Lightroom using a radial filter to soften and blur it, just to reduce its prominence; while resigning myself to the fact that the photo isn’t going to win any competitions. The extra isn’t perfect either, but again, it’s not bad – it’s unusual to catch the wings in that position, and I like the fact that it shows his madly intent stare. 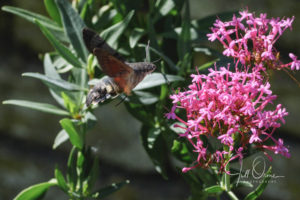 Later this afternoon I was outside with a pair of secateurs, wreaking my revenge on the valerian, when one of my neighbours walked past with her dog, and on hearing why I was prettifying a weed, generously invited to me to drop by her pond any time I might like to do so, to photograph the dragonflies that hang out there. So a day that began really quite badly has ended with me feeling very lucky – which is nice!