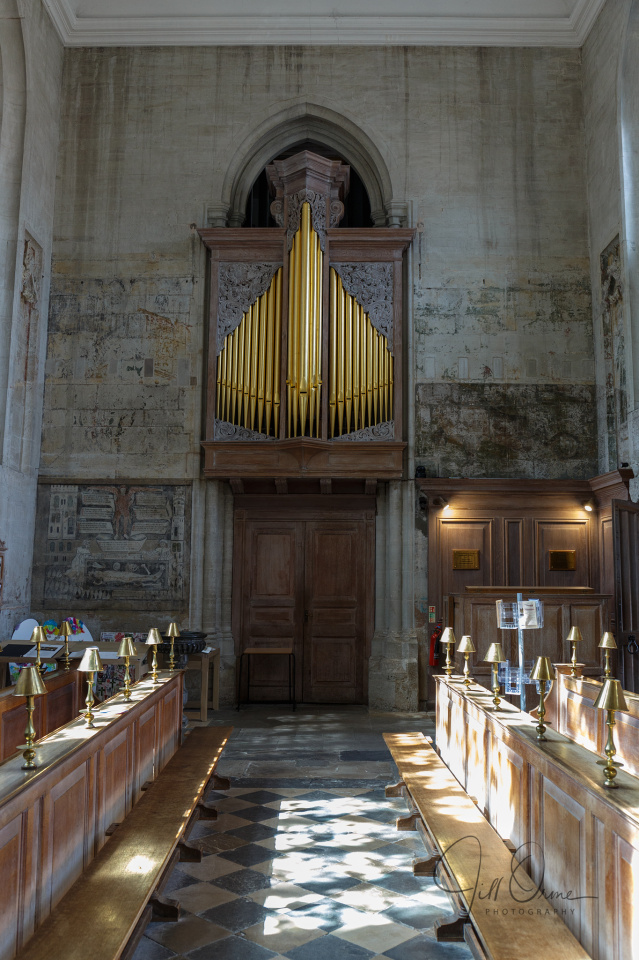 You can’t hear it of course, but I can, when I look at this image.

R and I had to run a couple of errands in Stratford this afternoon, allowing us a welcome break from shifting furniture; and having parked in Old Town we were walking along Church Street, when we heard the sound of the organ being played – beautifully – in the Guild Chapel on the corner of Chapel Lane. Drawn to the sound like Bisto Kids to the smell of gravy, we walked into the Chapel to listen. I don’t know, but I suspect that the organist was practising for a recital, and if that’s the case the audience is in for a treat.

I’ve blipped the Guild Chapel before, but probably not this view, which is the west wall. If you view the image full-screen you’ll be able to make out the remains of The Allegory of Death, one of its mediaeval wall paintings, which until recently was covered to preserve it, but which has now been conserved and is on permanent display. Back in the day, paintings like this (though brightly coloured) would have decorated the walls of many churches across the country, telling Biblical stories and tales of national and local religious legend, for the moral and spiritual benefit of ordinary people – who presumably followed the Latin mass intoned by the priest without necessarily understanding the actual words being spoken.

When Henry VIII fell out with the Pope in 1534 over the Pope’s refusal to grant Henry a divorce from Katherine of Aragon, and declared himself Supreme Head of the Church of England, it seems likely that on the ground nothing much changed, except for those priests and monks unwise enough to speak out against Henry, who were executed. But religious services were still recognisably Catholic, even after Henry’s perennial money troubles tempted him to go further and strip the Church of much of its land and power, in the wave of confiscations known as the Dissolution of the Monasteries.

The Protestant Reformation didn’t properly begin in England until the accession of Henry’s son Edward VI in 1547. Edward, described by the historian Michael Wood as “a pious, cold-hearted swot”, was a religious zealot, who ordered all places of worship to be stripped of their decoration – but probably fortunately died in 1553 before this wholesale destruction could be enforced across the country. He was replaced by his half-sister Mary, daughter of Katherine of Aragon and a pious Catholic, who attempted to reverse all of Henry’s and Edward’s religious reforms, and became known as Bloody Mary for the ardour with which she had resisting Protestants killed.

When Mary also died and her and Edward’s half-sister Elizabeth I came to the throne in 1558, the nation must have braced itself for more torment; but Elizabeth, though a Protestant, was also highly pragmatic, and though she was urged by some of her advisers to enforce the renunciation of the Catholic faith, she famously said, “I would not open windows into men’s souls.” However she did still issue a proclamation instructing towns and villages to remove “all signs of idolatry and superstition” from places of worship, including wall paintings and stained glass.

Five years later, in 1563, John Shakespeare, the town chamberlain of Stratford-upon-Avon, hired workmen to come into the Guild Chapel (which by this time had been central to the life of the town for three centuries), and cover over the wall paintings with lime wash. What he and the other members of the town council thought about this isn’t known, but they didn’t make a particularly good job of it: the paintings were said still to be clearly visible through the lime wash right up to the Civil War in the mid-C17th, and the stained glass was left alone. A few months after the painting over of the Chapel, John Shakespeare’s son (and the town’s most famous export) William Shakespeare was born; after making his career in London he returned to Stratford a wealthy man, and bought the biggest house in town – on the opposite corner of Chapel Lane to the Guild Chapel.

Over the centuries various structural changes and schemes of decoration were applied to the Chapel, but it was only in the C19th, when the paintings were uncovered during renovation work, that having been recorded they were virtually destroyed. Last year work began to repair and conserve what remains using the most up-to-date techniques, and now they’re freely available for those of us with the History Thing to stand in front of and gently quiver.

If you’re not already overloaded, you might like to take a look at the Chapel’s web site, which is here.