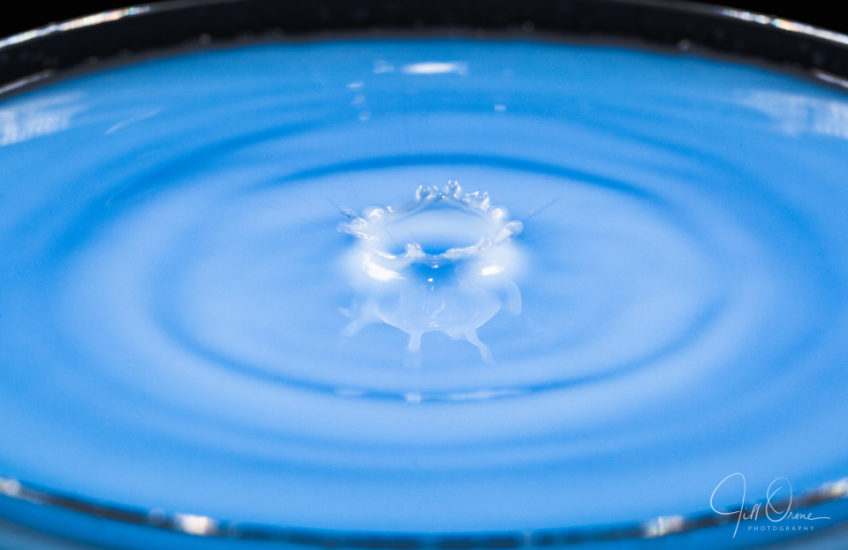 The day started pretty well, with a Wedding Conversation with Child One – to my immense surprise, not only is she turning into someone who’s interested in weddings, but so am I. Who’d have thought?

However, after that everything went downhill. After spending the rest of the morning updating (again) the iOs on my phone and iPad, and then all the apps that now didn’t work properly; and then installing the new versions of Lightroom and Photoshop (heart in mouth, because the old Lightroom catalogue couldn’t work with the new version of the software and therefore had to be rebuilt), I finally got round to thinking about taking a photo.  It was heaving with rain, so I scratched around looking for an indoor project, and eventually decided to have another go at some droplet shots. With hindsight, this seems like a bad decision. I couldn’t get the lighting right, and the gizmo I’d rigged up to support the container of drip solution didn’t work because it was casting a shadow over the bowl; so I wound up holding it and trying to keep still enough to aim the drops onto the point where I’d focused the lens, which merely proved what a steady hand I don’t have.

After a few score shots I took the camera to the Mac and plugged it in to upload my files – but after two had transferred, the upload stopped and I received an error message. I turned off the camera and then turned it back on, and the same thing happened – several times. There then followed a stressful hour of faffing about.

Firstly I had to work out whether the problem was one of my memory cards (annoying), or the 5DIII (very much more annoying – although it’s still under extended warranty, if it goes wrong it has to be sent away to Glasgow for repair). Luckily I was able to put first one card and then the other into the 7DII, to try uploading from there; the primary CF card emptied at high speed, but the secondary SD card produced the same issue as it had in the 5D. The good news was that this showed it was a card problem; the bad news was that there were a lot of files on that card. For a while it looked as though I was going to lose those, because there didn’t seem to be any way of lifting them off: I don’t own a card reader because I don’t like them, but even if I’d had one it probably wouldn’t have been able to read the card, because neither camera was able to play back the images. I was bracing myself to say goodbye to those photos, when a last attempt with the 7DII suddenly and inexplicably worked, and the files uploaded smoothly to the Mac.

Much relieved, I reformatted the SD card and ordered a new one to replace it, then loaded my shots into the new “Classic” Lightroom (which on first impressions is not in any way an improvement on the old build), and discovered that – literally – 99% of them were awful. It being Thursday I thought I could rescue one by taking into Photoshop to thrash it into an abstract image…. and discovered on opening the program that the new build has ditched all my Nik filters.