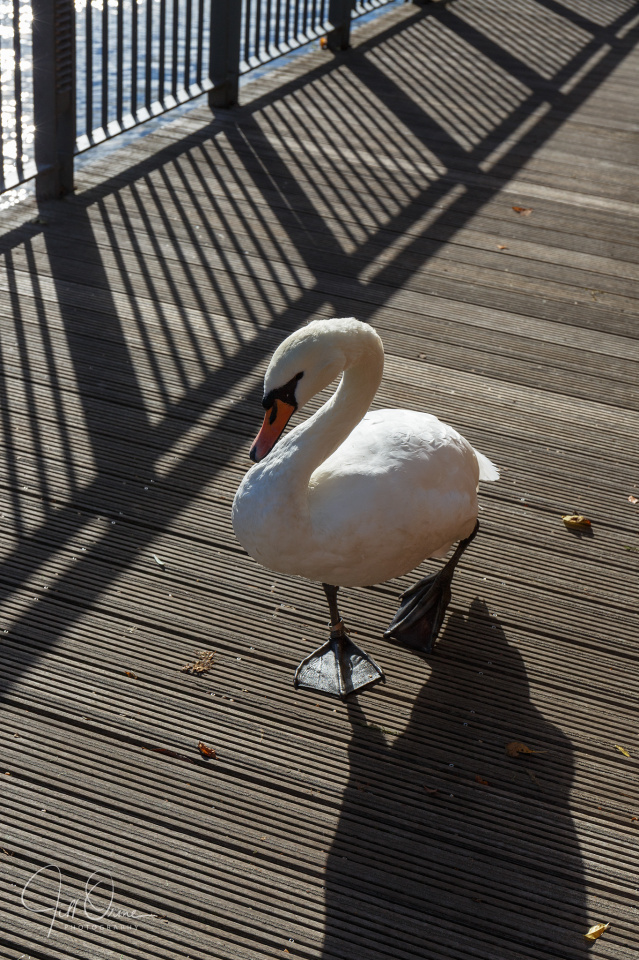 The routine breast scan that I wasn’t able to have a couple of weeks ago because the scanner broke down was rescheduled for this morning – but in Studley, which is about four times further than I usually need to travel to have this test done. Nonetheless, as I’ve already said, I’m grateful that this kind of screening is done free of charge on the NHS, so I accepted the appointment – and then R made everything absolutely fine by offering to drive me to Studley and then take me out for lunch afterwards.

Having parked in Old Town in Stratford we were walking along the river towards the centre of town, when we found ourselves following this swan. It’s not at all unusual to happen across swans out of the water in Stratford (though the swan warden is keen to discourage them from hanging around the RSC Gardens, because lots of people walk their dogs there and he hates being called out to a bird that’s been mauled), but it is unusual to find one marching along the Royal Shakespeare Theatre boardwalk – which is not only fenced from the river but several feet above it.

I’ve put in a couple more photos, the first of which gives you a better sense of where she’d managed to get to in relation to the river and the theatre – the grey metal wall that looks as though it might be part of a shipping container is the most recent extension to the RST, and contains things such as dressing rooms. I did wonder if she was heading to the terrace café in the hope of begging scraps, but the second extra shows her approaching the café, and seemingly beginning to realise that all was not quite right with her world. I don’t know if she turned back, or carried on to the other end of the terrace and then went down either steps or ramp to get back onto the quayside, but by the time R and I walked back again after lunch she was gone. 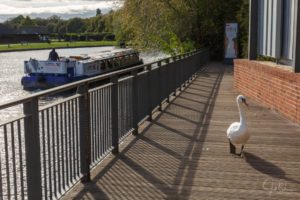 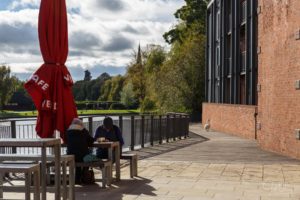 We both like the photo I’ve chosen to feature today because the strong shadow of the railing somehow adds drama to the swan’s determined perambulation – and that, given the location, seems rather appropriate.