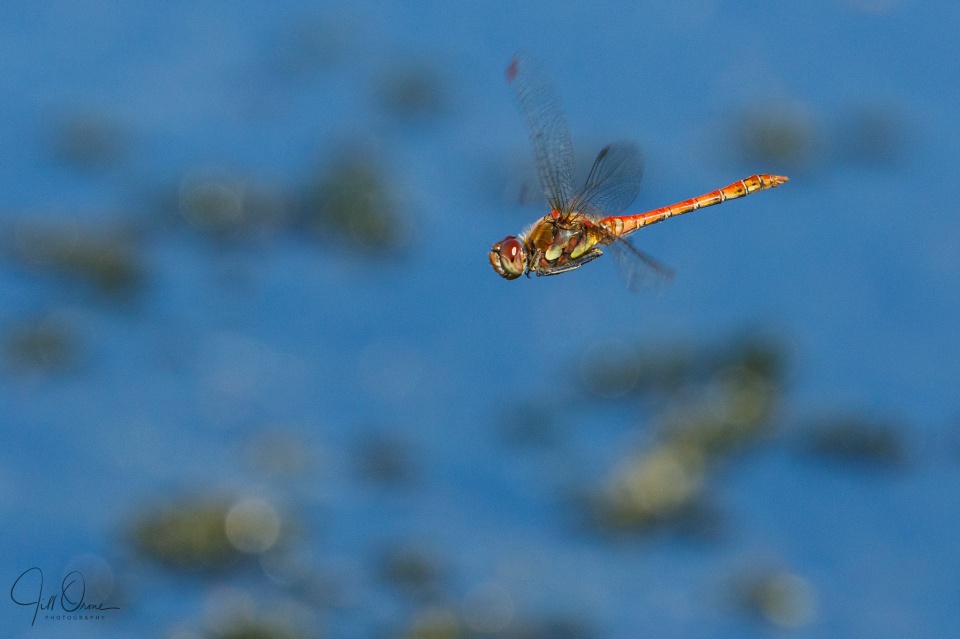 I cannot believe that we’ve reached the first day of September already – that’s two thirds of the year gone! Where did it disappear to?? I’ll be hitting another birthday any minute, and then it’ll be Christmas, and then it’ll be next year, and – waaahhh!!!

When I feel as though I’m running out of time, it’s instructive for me to sit and watch some dragons for a while. Not programmed to go in for existential angst, they simply get on with the things they need to do in whatever time is allotted to them; although it would be fair to say that competition for the right to mate and pass on their DNA was fairly fierce among the males at Grove Hill today, and it may be that they have an increased sense of urgency as the season moves into its later stages.

This is a male Common Darter, overflying the pond while several tandem pairs laid their eggs in the water below him, and waiting for his chance to grab one of the females as soon as her current partner released her. They’re very quick and restless, and although they do hover they’re not keen on having a lens pointed in their direction, and tend to veer out of the way as soon as they notice it – so I was quite lucky to capture this. 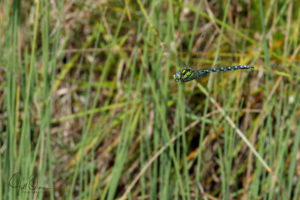 I had an even worse time with the Southern Hawker I’ve posted as today’s extra. There were three males patrolling the pond at one stage, but two of them caught and carried off females (one of them being my girl Spot), leaving this one frantically whizzing around the edges, checking all the usual oviposition sites and never hovering for more than a split second. I carefully didn’t note the number of duff frames I took in order to achieve two keepers, but I was relieved to be told by dbifulco this evening that she has a camera that’s managed to reach a shutter count of over 250,000!

On the subject of oviposition, there were no less than three female Brown Hawkers laying their eggs at the pond today. One I’d seen before – she’s quite distinctive, having half of one forewing missing, and is very nervy and shy; she surprised me by laying into the bank of the pond, as Southern Hawkers do, rather than into underwater vegetation, but that may just have been because her favoured site was occupied by someone else. The other two females were both fresher and in better condition, and I’ve posted a shot of one of them to Facebook, if you’d care to see it. It’s not as clear as I’d like because I couldn’t get an unimpeded view of her without shooting towards the sun, but compared with the male I posted a week ago, it does show the difference in colouring between the sexes of this species.