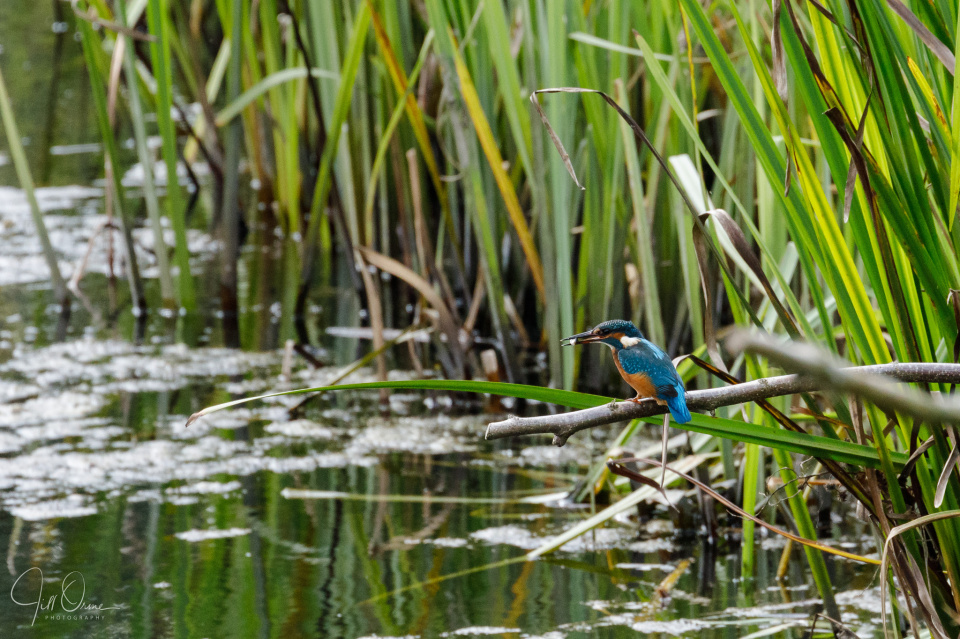 Since I became interested in photographing things with wings, the kingfisher has been my nemesis. I’ve lost count of the number of times I’ve gone into a hide and been told that there was a kingfisher there just five or ten minutes ago, and have then sat around in mounting frustration, only to have it not reappear. I’ve only ever photographed one twice before, both times at Brandon Marsh; on one occasion the bird was about half a mile away, or so it felt, and on the other it was just a couple of metres from me, but half hidden by a tangled shrub. So when I swung into Brandon Marsh this lunch time and was told that there was definitely a kingfisher showing at Steetley Hide, I wandered down there more in hope than in expectation. And indeed, it was a long time before this pretty female showed up, and I was beginning to think about cutting my losses and heading off elsewhere, when she suddenly appeared and gave the four of us who were still there a wonderful display of her fishing skills.

Her chosen perch was quite a way from the hide, so all my shots are heavily cropped, and I would certainly hope that one day I’ll get better ones. But it was a joyous thing just to be there and to be able to watch her diving – the speed of these little birds is astonishing, and the power with which they blast out of the water after a dive is really quite phenomenal. Which I suppose is why they need to eat so much protein: I reckon that over the course of quarter of an hour she caught and ate about half a dozen fish, most of them around the size of the one she’s holding here. I’ve put a few other shots on Facebook if you’d like to take a look – they’re not BPOTY material, but in the circumstances I’m not unhappy with them. By the way, if you were wondering how I know that this is a female, it’s because of the red colouring on her lower mandible, which you may be able to make out in this shot if you view it full-screen.

The other hunter I was able to photograph today was a hobby, which stormed through the area a couple of times, snatching dragonflies out of the air and eating them on the wing. About which, the best I can say is that I think it was a faster death than some of the poor fish suffered!