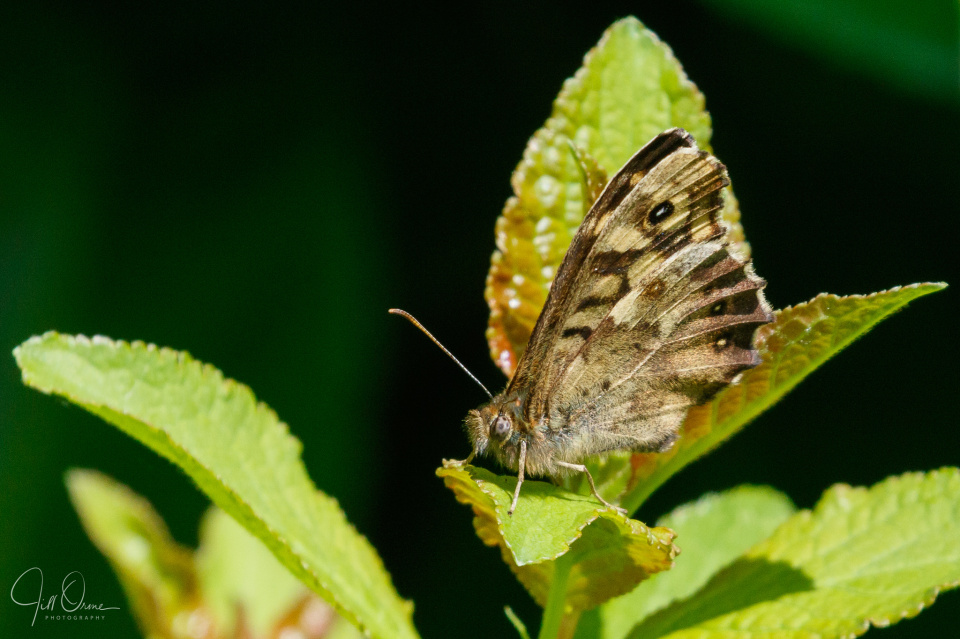 There are now four or five male Speckled Wood butterflies competing for possession of my garden, winding each other up, and having regular “fights” over the best basking spots. They’re quite annoying, to be honest, not least because they also tend to swoop on other insects such as hoverflies, and I’ve lost a few photos recently because my subject has suddenly been bounced off its perch by a marauding Speckled Wood.

Nonetheless, I was pleased when this chap decided to try out the secret garden this afternoon, while I was searching the laurel hedge there for inverts, because I liked the composition he made when he settled on this little self-sown plum sapling. In fact, though I saw him land I promptly lost sight of him, because he’d settled face-on to me with his wings half-spread, at which point he blended so well with the leaves that he become almost invisible. I had to edge round to the side to bring him back properly into view and get my photo. A few seconds later one of his rivals turned up, and the pair of them went whirling away over the hedge.

I looked up the topic of butterfly battles, and was interested to find a report on some research carried out at the Department of Zoology of Stockholm University back in 2011, which seemed to show that winning comes down to an individual’s level of motivation, rather than his size or strength. The author, Martin Bergman, is quoted as saying:

“We have studied the behavior of the speckled wood butterfly, where the males establish their territory in large sunny spots in forests. The males sit on the ground in the sunny spots and check out the females that fly by. These sunny spots are defended against intruders via extended flying duels. The flight contests, where the males circle around each other, can last up to 90 minutes. The winner gains access to the sunny spot as a reward, while the loser has to go and look for another suitable sunny spot.”

The theory is that in butterfly species where the males’ strategy is to sit and wait for females to fly by, rather than actively searching for them, possession of a prime sunny spot gives a mating advantage, and it will therefore be fiercely defended. The summary is here if you’d like to read more.