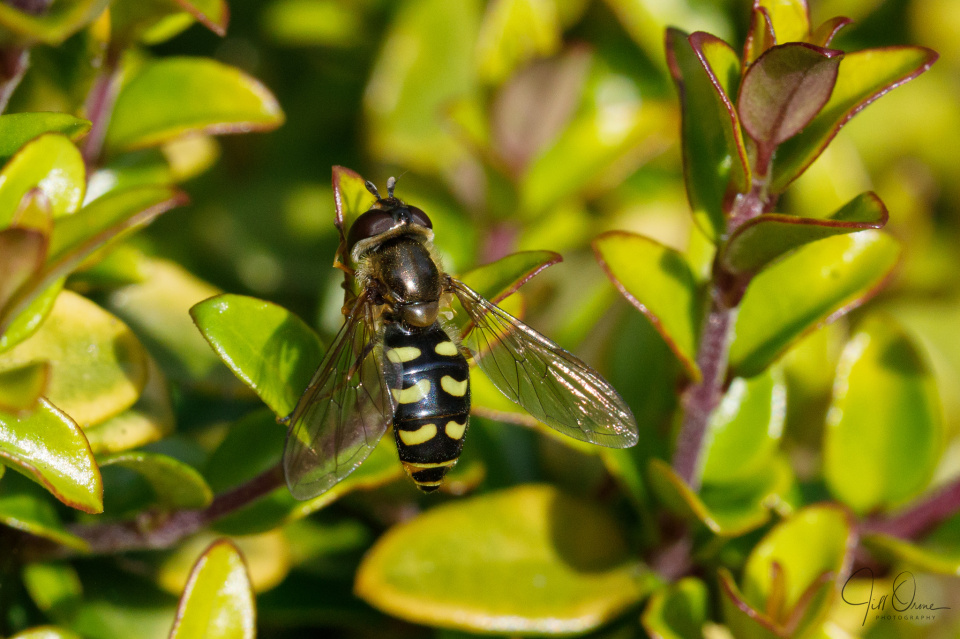 Waking to brightness behind the bedroom curtains, on a day when I knew cloud and rain was forecast, I decided to get up and out, to try to catch some inverts in the early sunshine. It was cold when I first stepped out of the door, and not much was flying – or roosting at a convenient level for photography – but it warmed up a little over the next hour and the insect count rose steadily, though happily for me my victims were still generally torpid enough to be approachable.

I think this hoverfly is a female Eupeodes luniger, though the recorders (who tend to be conservative in identifying to species) won’t go beyond Eupeodes. E. luniger is the commonest and earliest of the Eupeodes though, and the females have yellow markings that don’t reach the edges of the abdomen, and a dark Y mark on the top part of the frons, between the ocelli and the antennae – so I’m pretty confident in asserting that this is what she is.

E. luniger is a highly mobile and migratory species, with summer numbers in southern England boosted by incomers from Europe, but there’s also a spring peak, which is believed to occur when individuals emerge that have overwintered as pupae. The colouring is quite variable, and is believed to depend on the ambient temperature during pupation, with the summer brood being much paler than overwintered specimens like this one. Many species in this genus are associated with coniferous woodland, but the three most common species in the UK (E. luniger, E. corollae, and E. latifasciatus) seem to be less fussy, using a range of habitats including grassland, and frequently visiting gardens. The adults are nectar feeders, but their larvae eat aphids.

The weather forecast turned out to be correct, by the way: cloud built steadily from late morning onwards, and by dinner time it was teeming with rain. Looking out of the kitchen window at the sodden garden (and guiltily refusing entry to a small bumblebee, which was beating against the glass in an effort to gain shelter) it was hard to equate the scene in front of my eyes with this image.